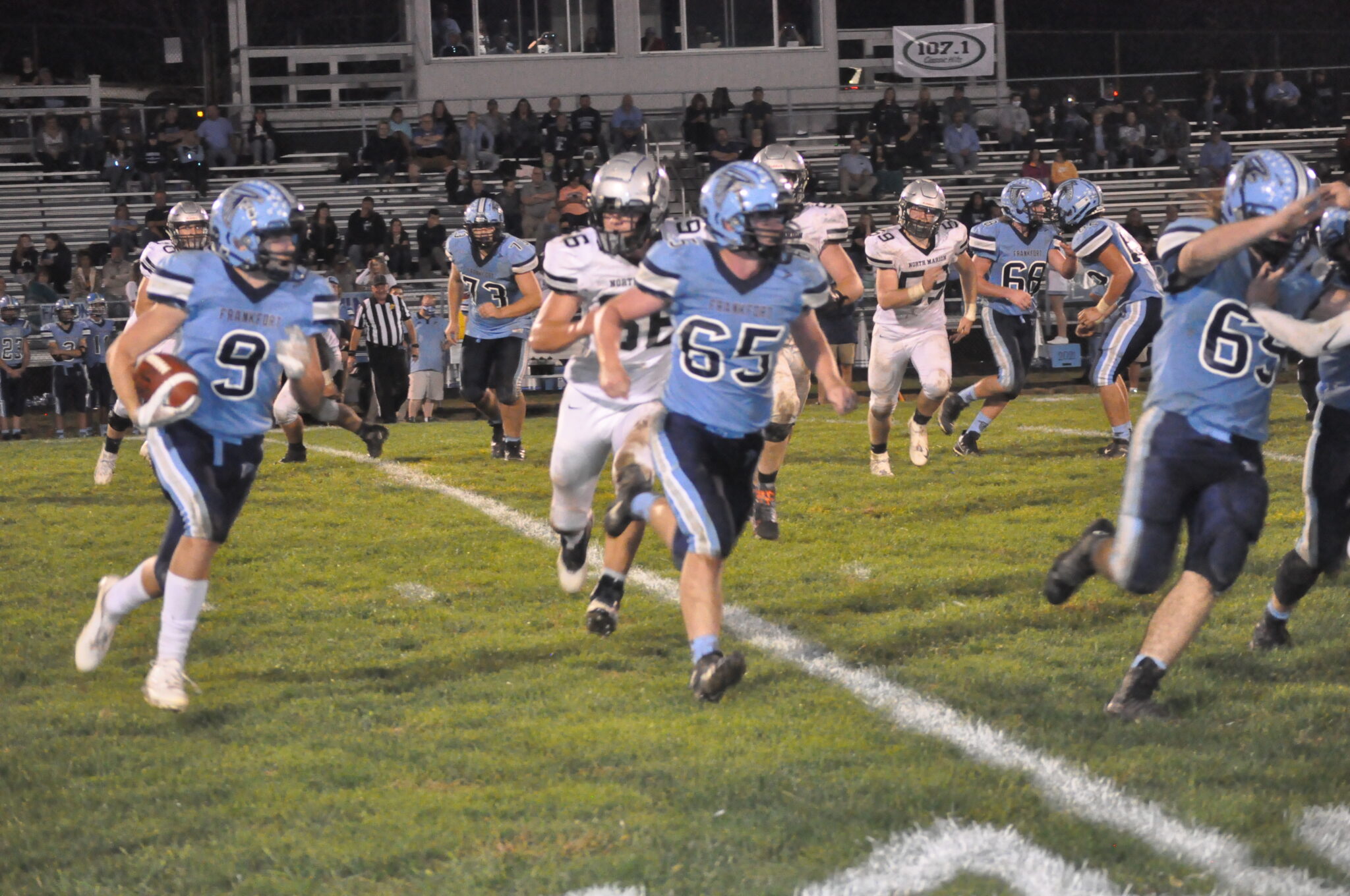 “I painted ’48’ on the practice field Monday and just tried to drive it in their heads to play for 48 minutes,” Whiteman said.

FHS did just that, taking the bite out of the Huskies by controlling the line of scrimmage and getting three of its five rushing touchdowns from Cole Hiett in a 36-19 win over the Huskies.

“I always challenge them to win the physical game,” Whiteman said. “I like being known as a physical football team and we were physical tonight. I can’t say enough about the effort. Our all-around effort in all three phases of the game was very good.”

After Peyton Clark gave Frankfort (7-1) a 7-0 lead with a 9-yard touchdown run, North Marion (5-2) pulled even when Brody Hall reached the end zone on a 1-yard quarterback sneak with 1:26 to play in the opening quarter.

Hiett answered with the first of his three scores — this one a 27-yard run on third-and-8. After the Huskies jumped offside on the point-after play, Frankfort converted a two-point conversion on Parker VanMeter’s run, leaving the Falcons with a 15-7 lead 10:32 before halftime.

“They established themselves at the line of scrimmage so well and that’s maybe the first game this year where we’ve had the size advantage,” Huskies’ coach Daran Hays said.
“They weren’t really big, but they come off the ball well and play physical on the interior.”

North Marion then went three-and-out and Clark’s 45-yard punt return positioned Frankfort at the Huskies’ 27 for its next series.

Two plays later, Hiett covered that distance with his second 27-yard TD run of the contest, upping the Falcons’ lead to 22-7.

Frankfort nearly added to its advantage on the final play of the half when Andrew Westfall completed a reverse pass to Brock Robinette, but he was brought down at the Huskies’ 1-yard line following a 13-yard gain.

North Marion drove 81 yards in 13 plays on the opening series of the second half, which ended with Gavan Lemley’s 11-yard TD run. The Huskies elected to go for two, but Hall’s pass fell incomplete, leaving them with a 22-13 deficit at the 6:57 mark of the third quarter.

Frankfort then answered with a seven play, 65-yard drive and took a 29-13 lead after Jansen Moreland crossed the goal line on a 5-yard run at the 3:11 mark of the third.

“He had some nice runs and on a couple his extra effort sprung him forward,” Whiteman said. “I’m proud of his effort and the way he kept turning his legs.”

Lemley scored on a 25-yard run with 17 seconds to play for the game’s final points.

The Falcons finished with 396 rushing yards, 217 of which came in the first half.

“The thing that stings for us,” Hays said, “is I thought we got beat with effort and that’s hard to swallow.”