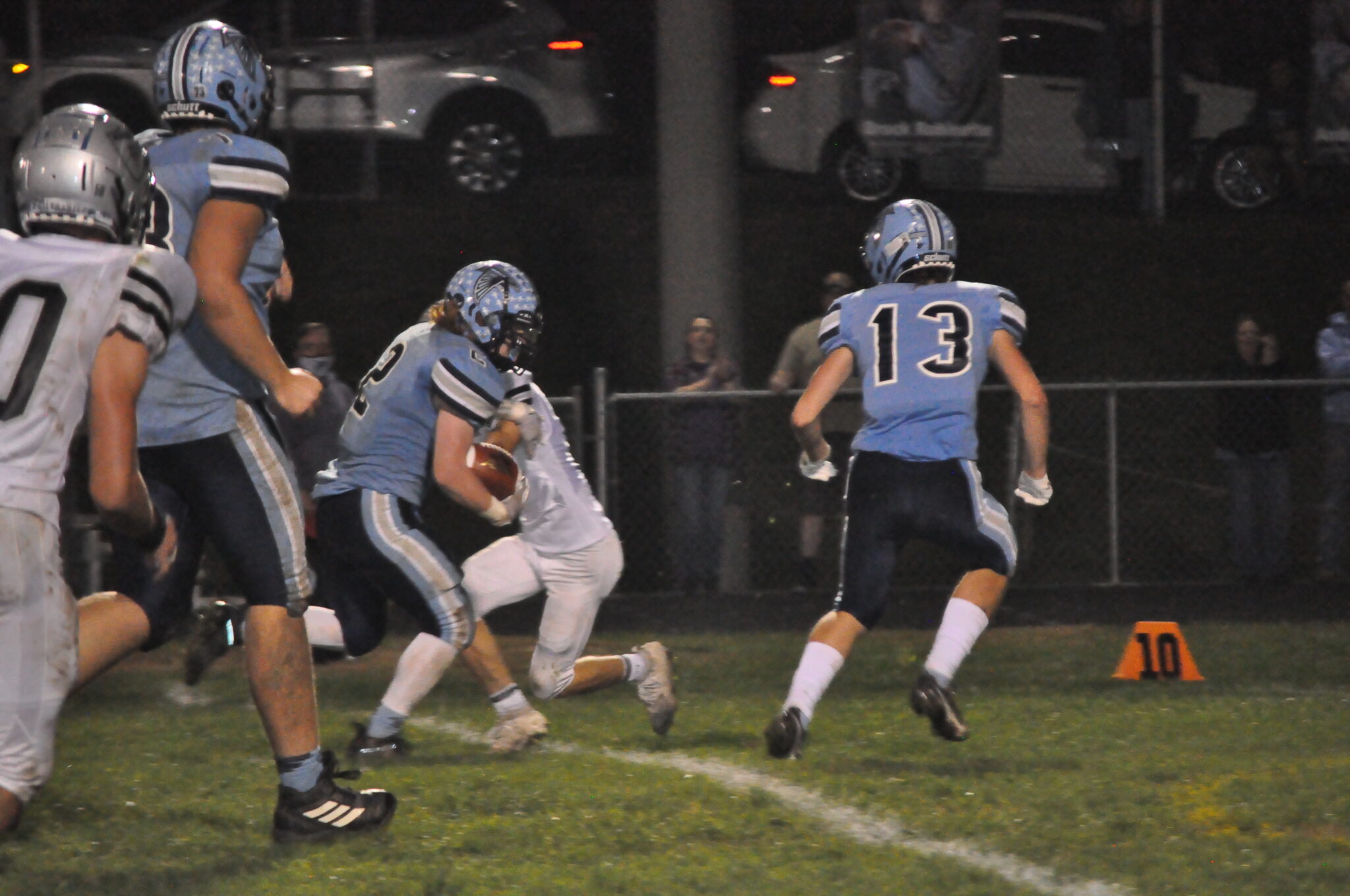 SHORT GAP, W.Va. — With its Wing-T offense working wonders through the first two months of the season, Frankfort has established itself as a contender in Class AA.

Having faced one of the more challenging schedules of any Class AA team, the Falcons bring a 7-1 record into Friday’s showdown against Oak Glen.

Although FHS is coming off perhaps its most impressive performance of the season in last Friday’s 36-19 win over North Marion, things won’t get any easier against the Golden Bears. Oak Glen (5-1) was a state semifinalist last season and is currently the top team in the Class AA MetroNews Power Rankings.

Frankfort is slated to finish its regular season with the annual Mineral Bowl against rival Keyser, a perennial playoff team.

“We have to have a strong finish, stay focused and keep working hard,” Falcons’ coach Kevin Whiteman said in the aftermath of the 17-point win over the Huskies. “It’s so hard to get teenage boys to understand how important it is to stay focused and work hard every day of the week — and then to come out on Friday night and play 48 minutes.”

After starting the season with three double digit wins in as many games, the Falcons began a stretch of three close contests against AAA foes with a thrilling 21-20 overtime win over Spring Mills. A 28-19 victory over Jefferson followed, before Frankfort suffered its first and only setback to date at Washington, 20-19.

But since then, the Falcons have powered past Petersburg (42-20) and handed North Marion its second loss of the season. Frankfort was No. 2 in the WVSSAC’s Class AA playoff ratings ahead of the matchup with NMHS, while the Huskies were No. 6.

“You come into a game like this with two ranked teams and you pull off the win,” Whiteman said, “it can’t do anything but help your confidence.”

The recpie for success against North Marion was similar to what it’s been for Frankfort throughout the season.

An offense predicated on running the ball with a variety of reliable options in the backfield lived up to its billing. Frankfort rushed for 396 yards and five touchdowns in the win and got at least one rushing score from three different players, with senior tailback Cole Hiett reaching the end zone three times.

After a three-and-out to start the contest, Frankfort scored touchdowns on five of its next series — the only trip being when the Falcons ended the first half at the North Marion 1-yard line as time expired.

In addition to Hiett’s breakout performance, Jansen Moreland and Peyton Clark each scored a TD, while Parker VanMeter ran in a two-point conversion.

“It’s hard because you don’t have a guy to key on so to speak,” North Marion coach Daran Hays said. “I really like (Clark), but most of there offense runs through (Moreland). But just when you think that, (VanMeter) pops out there.

“They have so many different guys coming in and out. It really forces you to focus on the scheme versus the player, which poses a problem. That’s part of the Wing-T. They attempted three passes. They’re just kind of slow and steady and pound it away.”

Frankfort’s defense has also done its part, having already registered two shutouts and holding opponents to 15.5 points per game. Oddly enough, the Falcons have allowed either 19 or 20 points in five consecutive contests.

Against a balanced North Marion offense that makes a defense play both the run and pass, the Falcons helped themselves by frequently forcing the Huskies into long yardage situations on second and third down.

“Our defensive coaches did a great job and we knew they were going to throw and run,” Whiteman said. “The quarterback does a nice job and early in the game he got us on some RPOs (run pass options). I felt like we did a better job against those RPOs after the first few series.”