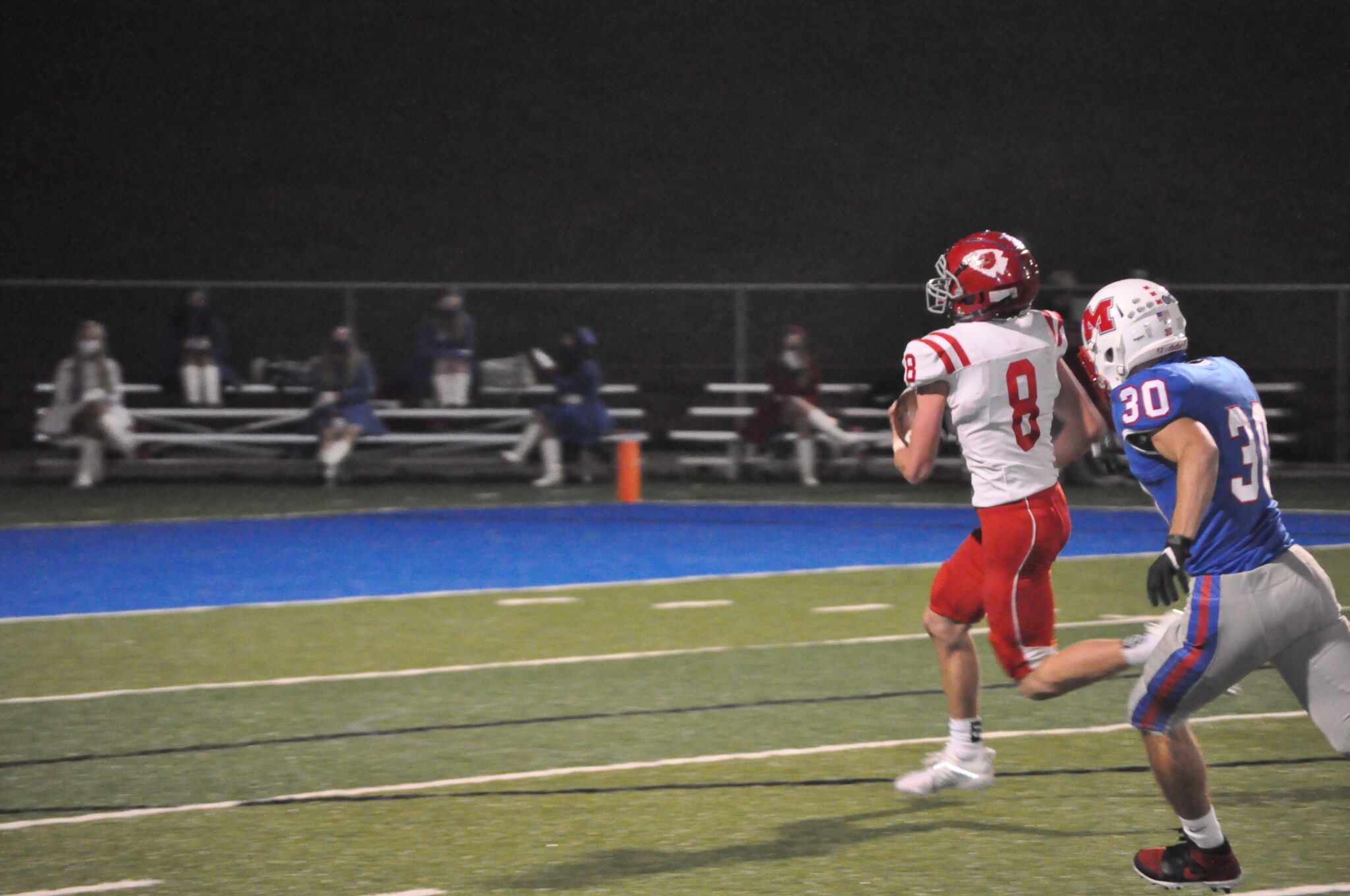 MORGANTOWN, W.Va. — Class AAA No. 7 Bridgeport secured at least one home playoff game, running wild past No. 12 Morgantown for a 42-7 victory Friday night in the regular season finale for both teams at Pony Lewis Field.

Three Indians — Cameron Cole, J.T. Muller and Hayden Moore — each surpassed 100 rushing yards for the Tribe, who piled up 402 rushing yards in the lopsided road win.

“There’s places for them to run,” BHS coach John Cole said. “However, we have backs that are talented and have good vision. They’re all a little bit different, but they’ve learned to read the blocks well and learned to read this (Single Wing) offense well.”

Playoff projections have Bridgeport as the No. 5 seed and slated to host George Washington in the opening round. Morgantown is projected to fall out of the top 16 with the loss and miss the postseason.

Moore, who rushed for 107 yards, opened the scoring with his first of two rushing touchdowns from 1 yard to cap the opening 62-yard drive. Austin Springer knocked in his first of six point-after kicks to give the Indians (6-1) a 7-0 lead 3:29 into the action.

Morgantown (3-3) got inside the BHS 25-yard line on its opening series, but stalled on downs.

With early momentum on its side, Bridgeport doubled its lead when Cole, who rushed for 129 yards, scored his first of three rushing TDs from 3 yards on the first play of the second quarter.

The Mohigans responded with a 67-yard drive to produce their only points on Cam Rice’s 11-yard touchdown run, allowing them to cut Bridgeport’s lead in half 10:31 before halftime.

“We got settled down a little bit and got ourselves back under control, but by then we’re playing catch up and that’s hard to do against a team that’s going to possess the ball like them,” MHS coach Sean Biser said.

Morgantown then stopped Bridgeport on four straight plays inside the 5-yard line to regain possession. But just as it appeared the Mohigans had all the momentum, they went three-and-out, and a 15-yard punt allowed the Tribe to start just outside the red zone 2:22 prior to halftime.

Six plays and 2:05 of action later, J.T. Muller crossed the goal line from 2 yards, sending Bridgeport into the break with a 21-7 lead.

“Right before half, we gave them a short field and you can’t do that,” Biser said.

Morgantown punted early in the second half, and Muller broke loose for a 79-yard run on Bridgeport’s first play of the second half to set up Cole’s 2-yard TD run at the 9:01 mark of the third quarter.

The Tribe held the Mohigans without a first down on each of their next two series, while Moore found the end zone again on a 39-yard run, before Cole capped the scoring with a 31-yard run at the 3:46 mark of the third

“I don’t know that we saw that coming (from the defense),” Cole said. “Our defense really stepped up in the second half. When you play their offense, it takes a while to read what’s going on.”