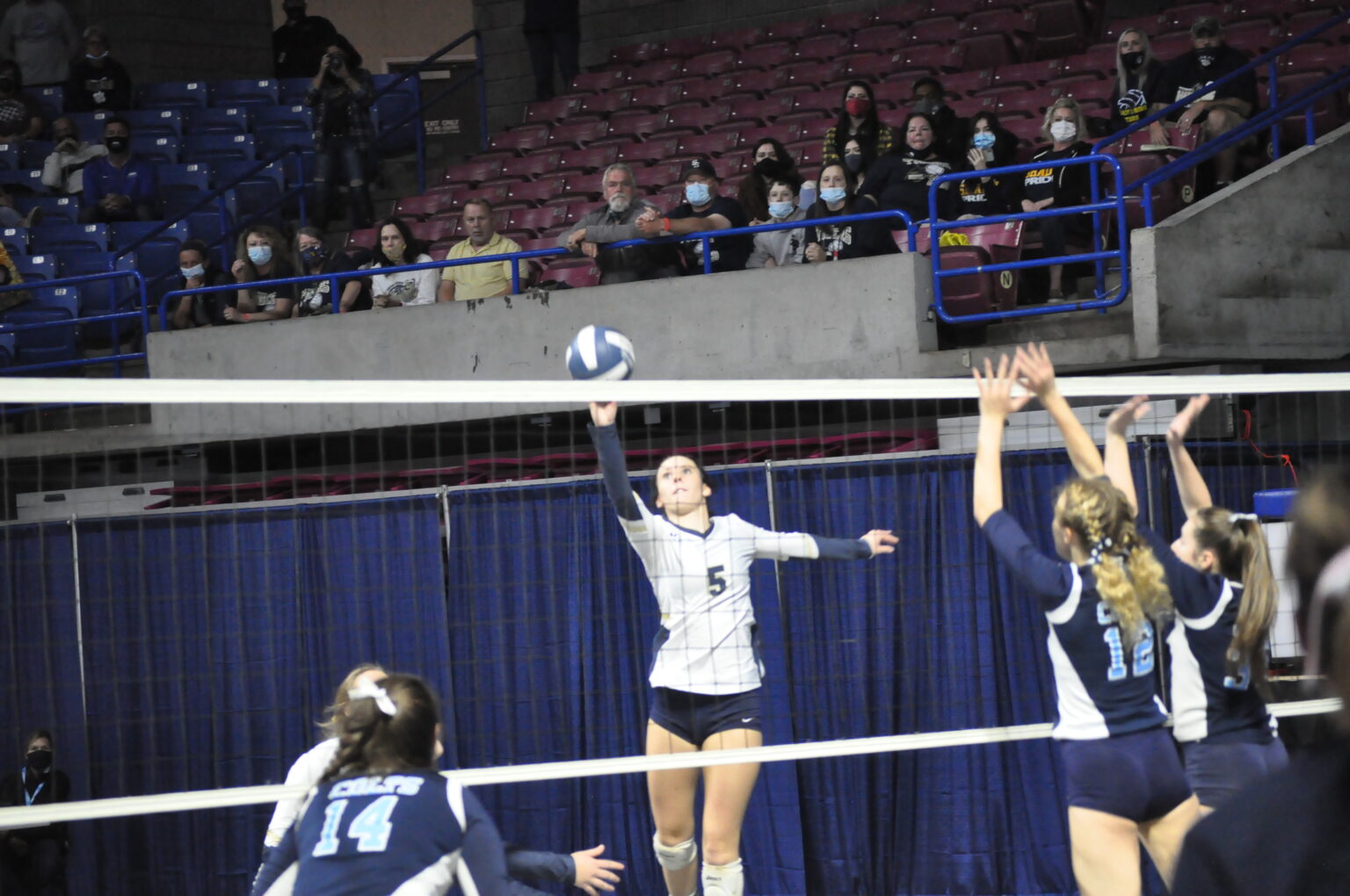 Shady Spring celebrates in the moments after its three-set win over Philip Barbour in Friday's Class AA title game. Photo by Greg Carey/WVMetroNews.com

CHARLESTON, W.Va. — Facing a 19-14 deficit in the opening set of Friday’s Class AA title game, Shady Spring was in need of a spark to avoid falling behind against Philip Barbour at the Charleston Coliseum & Convention Center.

The Tigers found one in the form of serves from Peydon Smith, who helped provide 10 consecutive points for Shady Spring to rally for a 25-20 win in the opening set. The Colts could never recover, with SSHS claiming the next two sets 26-24, 25-22 to win its first state championship since 2003 and sixth overall.

“All week long, we talked about how it’s not OK just to win and we have to play every point like it’s game point,” Tigers’ coach Kelly Williams said. “You’re not done until it’s done. The mentality we had this week of we can’t just be happy because we’re ahead and we can’t be sad because we’re down and we have to keep pushing no matter what — it made a difference.”

The back-and-forth opening game saw the Colts (35-9) overcome a 13-11 deficit with an 8-1 surge that gave them the 19-14 edge. But just as it looked as though PBHS would be the team to get off to its desired start, Smith’s serves helped save the Tigers, who seized the momentum after winning the opener.

“Peydon has done such a good job with that serve,” Williams said. “She’s worked so hard to get it consistent and it paid off tonight. That’s another example of our hard work.”

The Tigers (26-2) got off to a strong start in the second set and held a 9-5 lead, but the Colts eventually tied at 16 after a run of four straight points was capped by Averi Carpenter’s ace.

Shady Spring pulled in front 21-18, only for Philip Barbour to reel off three straight points and tie it again. With the second set tied at 24, the Tigers pullled through late and scored consecutive points to prevail.

Leading 2-0, the Tigers showed no sign of complacency and instead used a 4-1 surge in the third set to go ahead 12-7 on Chloe Thompson’s ace.

SSHS eventually built leads of 20-14 and 23-16 in the final set, though the Colts battled to the end and pulled to within 23-19. The Tigers scored the next point, before PBHS ran off three straight to get to within two, but a kill from Shady’s Kelsie Dangerfield sealed the verdict.

“They have a good team and everybody predicted from the beginning that it’d be us and Shady in the championship,” Halfin said. “They say it’s going to be that way for the next few years so hopefully we can take turns winning titles. They have a really good team and I enjoy playing them.”

Carpenter and Katie Kennedy led the Colts with 10 points apiece, while Alyssa Hill had 10 kills and 10 blocks in defeat.

The Tigers, who finished Class AA runner-up in 2019, suffered one of their two losses this year to PBHS on Sept. 12.

“We hadn’t really played a team of their caliber, so we weren’t ready,” Williams said. “The girls came out to work every day and put in the time and we did our job.”