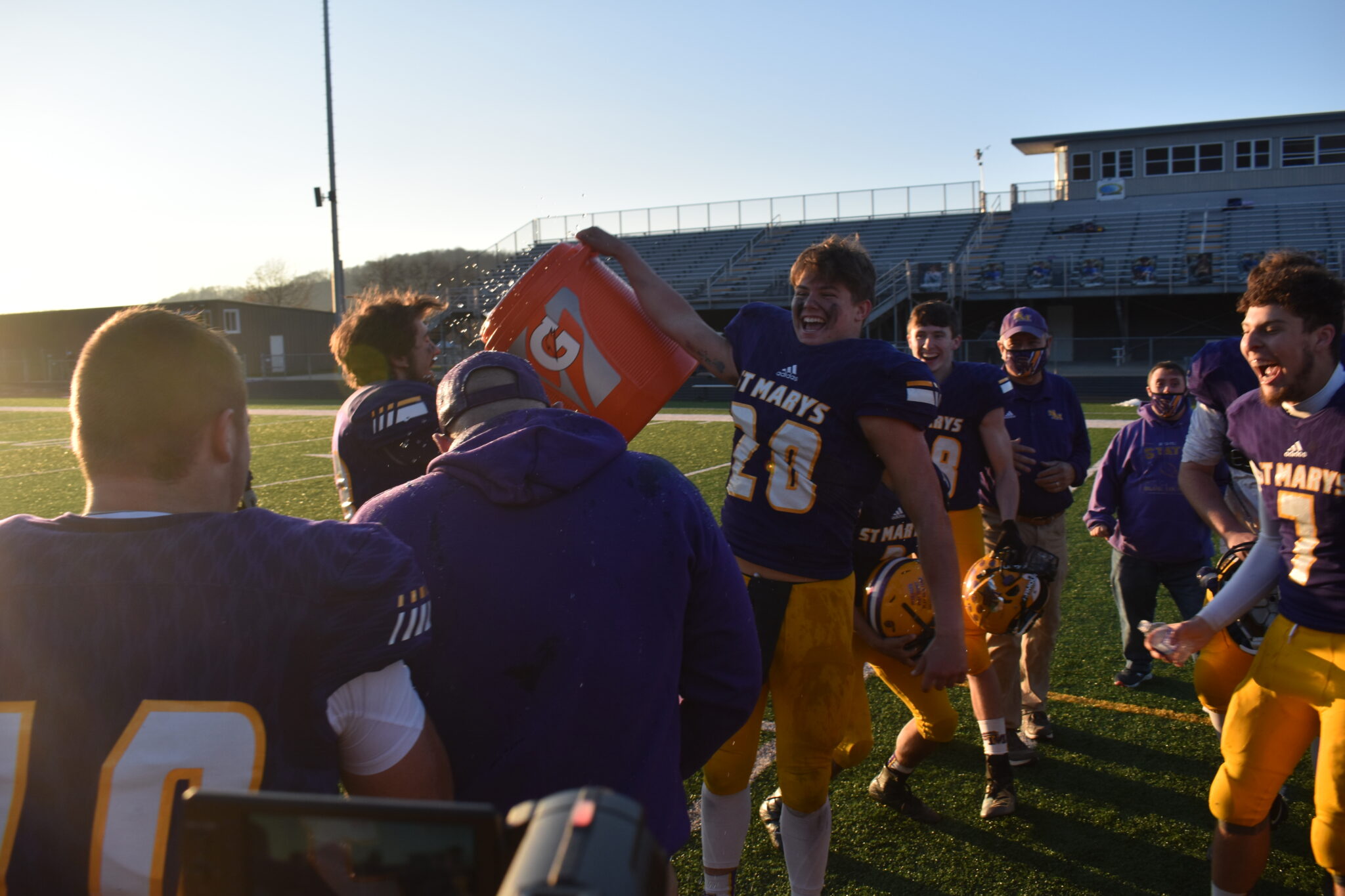 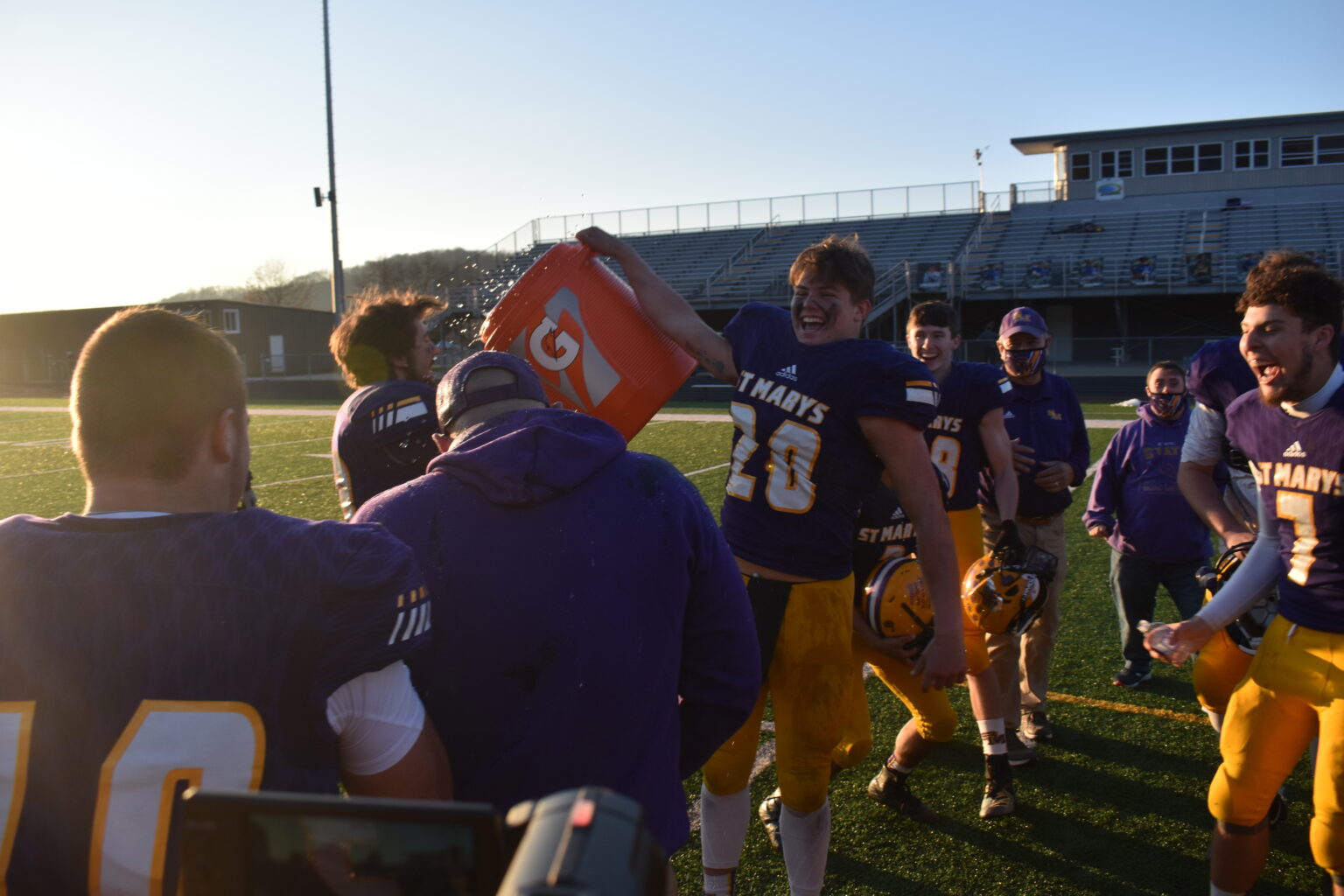 St. Marys celebrates in the moments after its 21-7 win over Pendleton County. Photo by Teran Malone 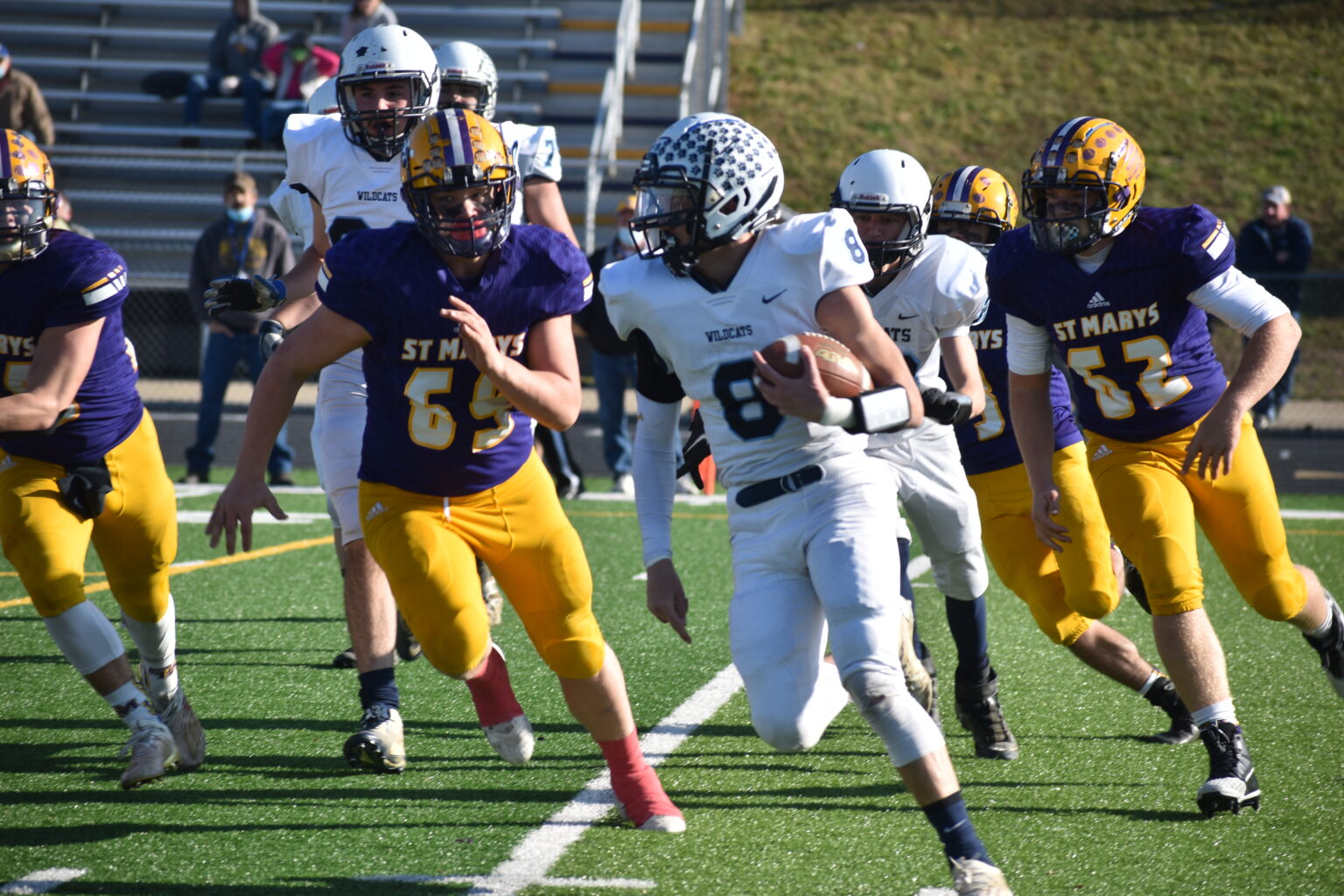 Pendleton County quarterback Isaiah Gardiner tries to get away from the St. Marys defense. Photo by Teran Malone 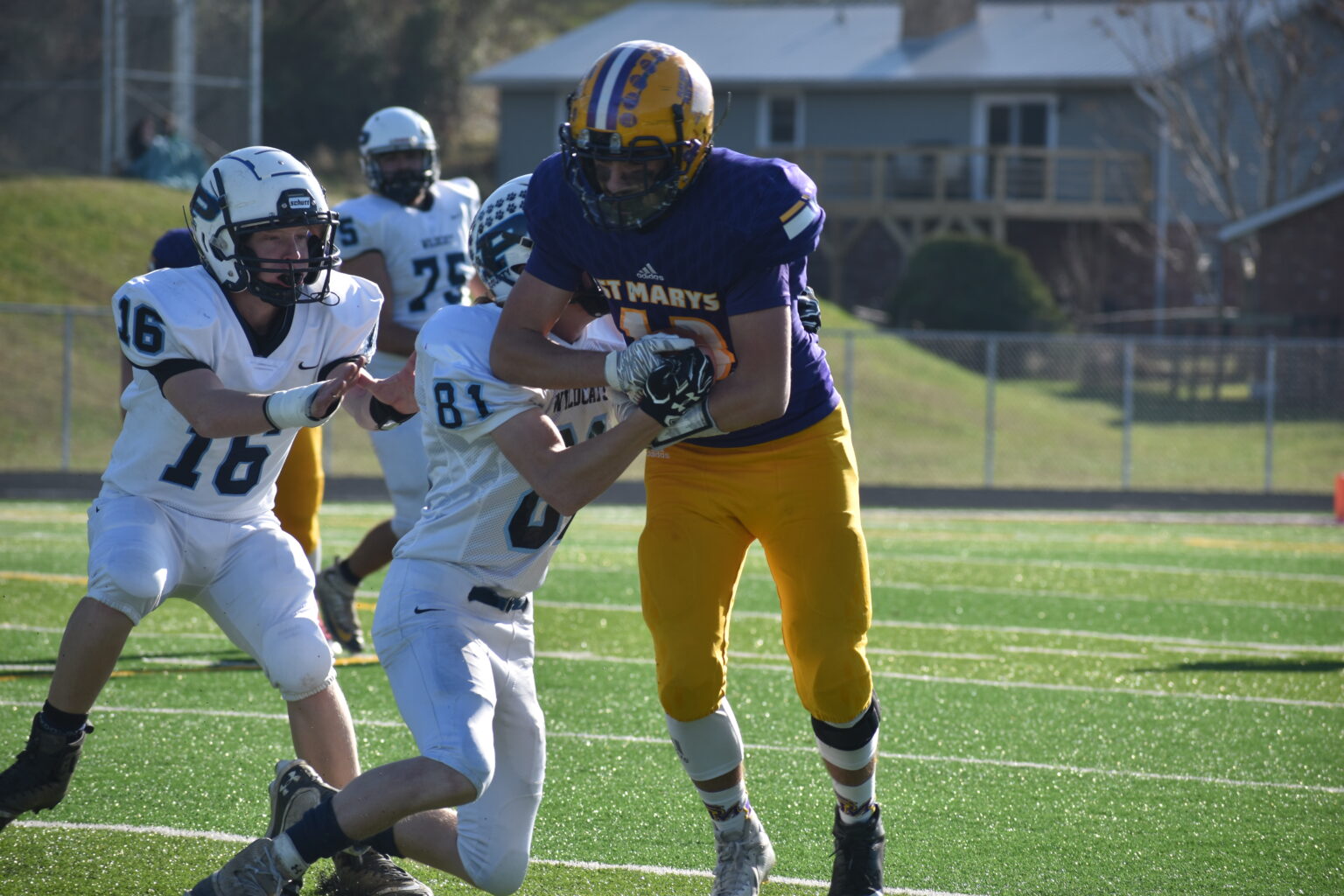 ST. MARYS, W.Va. — With Pendleton County trailing St. Marys by seven points and facing fourth-and-goal from the Blue Devils’ 1-yard line late in the third quarter, Wildcats’ coach Zac Smith was left with little choice but to try for a touchdown.

Unfortunately for Smith, Pendleton quarterback Isaiah Gardiner was stood up short of the goal line, giving the fourth-seeded Blue Devils the ball back. Two plays later, St. Marys senior Darrien Bortey delivered a play that won’t soon be forgotten, breaking off a 99-yard touchdown run that allowed the Blue Devils to double their lead en route to a 21-7 victory over the eighth-seeded Wildcats at Bill Hanlin Stadium.

“I kept my legs driving,” Bortey said. “I knew this may be my last game as a senior, so I wanted to do whatever I could to get in the end zone and that’s what I did.”

Normally, the win would give St. Marys a spot in the Class A title game against nearby rival Ritchie County. However, with the statewide COVID-19 map Saturday evening showing Ritchie County in red, the Rebels are unable to play, preventing them from getting a rematch with a Blue Devils team they lost to 34-26 back on Sept. 18.

St. Marys was named Class A champion later Saturday by the WVSSAC, giving the Blue Devils their second state championship.

“We were thankful to play and come away with a huge victory today,” Blue Devils coach Jodi Mote said.

The game-changing sequence came moments after Gardiner’s 19-yard pass to Ryan Mitchell on fourth-and-4, which put Pendleton (7-3) at the St. Marys 4. The Wildcats were unable to score on four running plays inside the 5, giving St. Marys (10-1) the ball back with 1:23 to play in the third quarter.

“It’s a game of inches,” Smith said. “Two yards, a couple fourth down plays and we can’t convert and execute. They execute on a couple big plays and that’s the difference. Should have, could have, would have, you’d like to have a couple of those calls over again and say what if. That’s a good football team and program and they know how to win.”

The Wildcats were held without a first down on each of their next two series, and although they approached the red zone with inside of 4 minutes to play, Gardiner was intercepted by Ben Long, allowing the Blue Devils to essentially seal the win with 3:39 remaining.

One week after knocking off Midland Trail 52-49 in a quarterfinal, the St. Marys defense displayed all sorts of improvement. With the game scoreless early in the second quarter, the Wildcats took over on their own 15. On the next play, Gardiner was intercepted by Blue Devils’ quarterback/linebacker Brennan Boron, who returned the pick 22 yards for the game’s first score 9:20 before halftime.

After falling behind, Pendleton gained 68 yards on its ensuing series, but Gardiner was stopped short on a run on fourth-and-goal from just inside the Blue Devils’ 2.

“The defense made some huge plays, but the two fourth down stops were special,” Mote said.

Still, Pendleton forced St. Marys into a punt that allowed it to start at the Blue Devils’ 41 with 1:28 to play in the opening half. Two plays after Gardiner’s 34-yard pass to Braden McClanahan, Mitchell rushed for a 7-yard touchdown, which combined with Josh Alt’s point-after kick, tied the contest at 7.

The game was only knotted for the next 21 seconds as the the Blue Devils marched 55 yards in three plays and went back ahead on Boron’s 29-yard TD pass to Logan Rice 51 seconds before the break.

St. Marys took the 14-7 advantage into halftime and held Pendleton scoreless the rest of the way.

“I hate it for my team and especially for my seniors,” Smith said. “We just didn’t have enough on a couple plays and that’s the difference.”