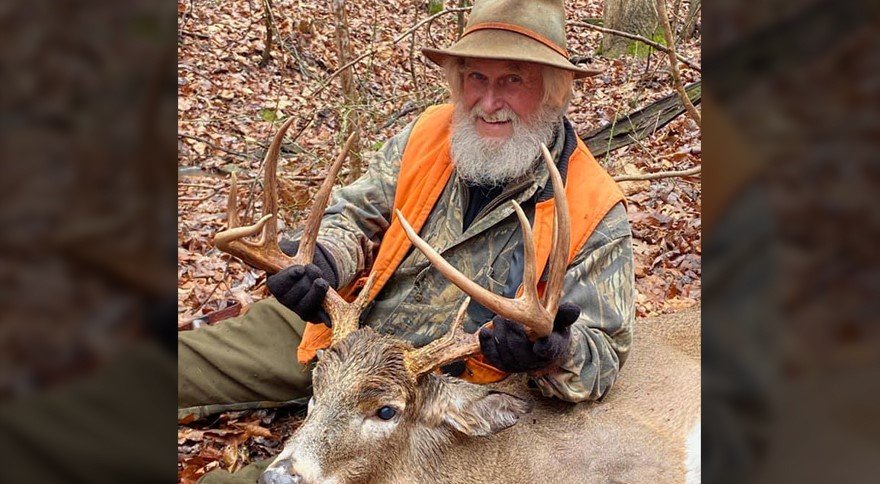 Fred Lambert of Oceana, W.Va. at age 70 killed one of the biggest bucks of is life during the second week of the 2020 rifle season.

RENICK, W.Va. — There was a time in West Virginia when the Monongahela National Forest was the premium destination if you wanted to kill a deer in the Mountain State. Much has changed since the early 1970’s for deer hunting in West Virginia. However, for Fred Lambert of Oceana, it really hasn’t.

He’s been hunting the same part of Greenbrier County every buck season since 1973.

“We were just looking for a place to go hunting really with the rifle season closed in Wyoming County. When I was a young man, I wanted to go deer hunting with a rifle and this is where I hit the ground,” he said in an interview of West Virginia Outdoors.\

Listen to “Fred Lambert of Oceana, W.Va. talks about killing his National Forest 10 point buck on W.Va. Outdoors” on Spreaker.

During the nearly 50 years he’s hunted the area a lot has changed. Lambert said the number of hunters has dropped a lot, but so have the number of deer and turkey he sees. During the early 1970’s when he started hunting the area, there weren’t many deer or turkey anywhere in West Virginia but the concentration of whitetails was largest in the National Forest. During the many years he’s hunted there he had only killed one other good sized buck.

“The first one I ever killed, I thought he was a spike and I was at the top of the ridge and he was at the bottom of the hollow,” Lambert shared.

It turned out that buck was an eight pointer many years ago. Lambert said when he’s buck hunting, he gets too excited to count points and instead looks for antlers.

“I get too excited to stare at them,” he laughed.

Monday morning in the second week of the gun season the forecast called for heavy rain. Lambert told his youngest son he was going to try and hunt a little closer to the road so he could quickly return to his truck if conditions became too miserable. He walked up a drain he knew well, but almost instantly saw another hunter. He turned and headed the other direction and soon ran across another hunter.

“That’s the most people I’ve seen in there in years. I don’t like to hunt near people, so I headed to another part of the area up a fire service road,” he said.

At age 70, Lambert can still outwalk most hunters, but admits he’s not as agile as he used to be.

He also admitted as he was walking deeper in to the wilderness, he was having a conversation with himself.

“I said, ‘Fred what are you going to do if you kill one back in here, you can’t pull it out yourself,'” he explained.

Undaunted he kept going and soon found himself in a conversation on the phone with his brother who was at Kroger and checking on what supplies might be needed at camp.

“At the end of the conversation I told him, ‘Bring me a ten-pointer.'” he explained.

A short five minutes later–the delivery was made.

Lambert heard a deer snort just as he got off the phone and saw a doe bolting up the hollow below. Behind her was a buck, which stopped at about 60 yards away with his head behind a large poplar tree. A third deer, another doe, snorted and bolted out of site.

“All I had was a little brown spot to shoot at because I knew if he came out from behind that poplar he was gone. So I aimed right at that little brown spot, cut his back in two and he hit the ground,” Lambert said.

Just like his eight point buck from many years earlier which he thought was a spike, Lambert was in for another surprise when he retrieved his buck. It was a ten pointer just like he had ordered from his brother at Kroger minutes earlier. He had no idea.

His son was within cell range and arrived to help out. Soon, Fred’s biggest buck since the early 1970’s was hung on the game pole at the foamily hunting camp where many memories have been shared over the years. Now the ten pointer he ordered from Kroger in 2020 will be added to the camp stories for many years to come.