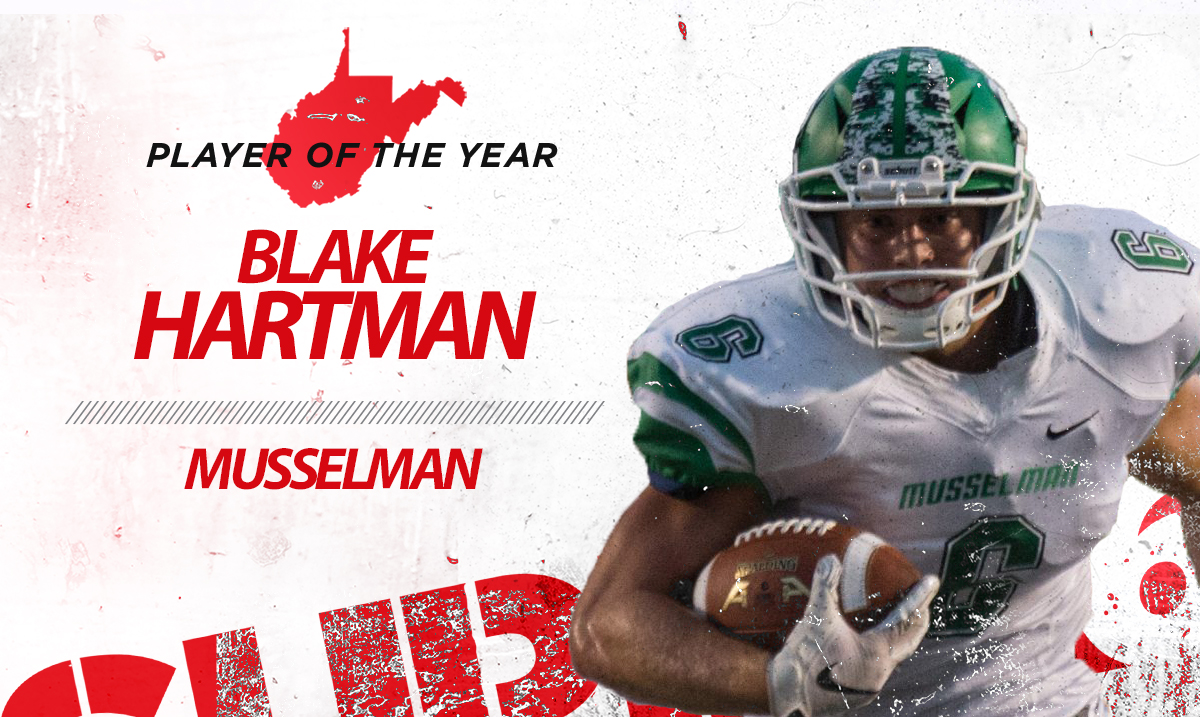 INWOOOD, W.Va. — In a season full of uncertainty for high school football teams across the state, Musselman coach Brian Thomas knew he could always count on senior tailback Blake Hartman.

Hartman, a Class AAA first-team all-state honoree in 2018 and 2019, made the most of eight games in his final prep season, rushing for 1,835 yards and accounting for 35 touchdowns.

For his efforts, Hartman is the recipient of the 2020 MetroNews Football Player of the Year, as voted upon by media members across the state.

“There’s a bunch of good players in the state and I got to play against a good bit of them this year,” Hartman said. “To be up there and mentioned with some of the big names and some of the big-time players, it’s a huge honor for me.”

Hartman exceled throughout a 7-1 campaign for the Applemen, leading them to a No. 3 playoff seed before their season was cut short by the statewide color-coded COVID-19 map prior to a semifinal matchup at South Charleston.

Had Musselman been able to play one more game after beating UHS (the Applemen advanced past Spring Valley in a quarterfinal when the Timberwolves were ousted by the color-coded map), odds are Hartman would have set the career touchdown mark as well.

“In April, while we were in quarantine, he was lifting and running every day,” Thomas said. “He obviously got better as a player, but the strength he added along with keeping up his speed is where he really grew from last season to this season.”

Hartman, who ended his junior season around 190 pounds, began this season in the 220-pound range and ended it near 210 pounds.

“I’ve always been a pretty physical runner and been able to balance speed and physicality,” he said. “I became more of a downhill runner. As a junior, I got a lot of jet sweeps, and this year I was more of a straight hard-nosed running back. I embraced that a lot.”

Despite being a first-team all-state selection each of the last two seasons to go with a second-team all-state pick as a freshman, Hartman consistently displayed improvement over the course of his prep career.

“What really impresses me about Blake is you get a lot of kids who have success when they’re younger and their heads get too big or they don’t get any better,” Thomas said. “He wanted to get better every single day. He was never satisfied.”

After rushing for 149 yards and three TDs in a season-opening win against Jefferson, Hartman delivered one of his better individual efforts in a Week 2 loss at Martinsburg. Despite the Applemen falling to the Bulldogs 51-33, Hartman rushed for 259 yards and scored all five of his team’s touchdowns.

“You’re not happy losing a game, but my first three years, I don’t think I was able to break 100 yards against Martinsburg in any game,” Hartman said. “For me personally, that was a big confidence booster.”

There was also a 256-yard rushing performance with three TDs in Musselman’s 42-21 victory over eventual Class AA champion Fairmont Senior, as well as a 261-yard effort with three rushing TDs, a kickoff return for a score and a passing touchdown in a 49-7 win at playoff qualifier Hurricane.

“Having success in the past puts a lot of pressure on you going in as a senior,” Hartman said. “There were a bunch of different roles I was trying to fill myself and you have a target on you every game. People want to see how you react to that. That’s what’s helped make me a great player. I tried to be the best possible leader I could be and I feel like I did a pretty good job with it this year.”

Hartman’s leadership qualities extend well beyond the field. The Lehigh commit has a 4.5 GPA throughout high school and was offered by every Ivy League school but Princeton and Columbia, as well as every Patriot League school with the exception of Holy Cross.

“Everybody I talk to has tons of questions about him and the first thing I make known is people see the football side of things, but this all starts with him being an outstanding young man,” Thomas said. “Anytime your best player does that well in school and he’s the first to show up and last to leave for a workout, the success all starts there.”

With three points, Parkersburg quarterback Bryson Singer finished sixth and was the only other player with more than one point in voting.