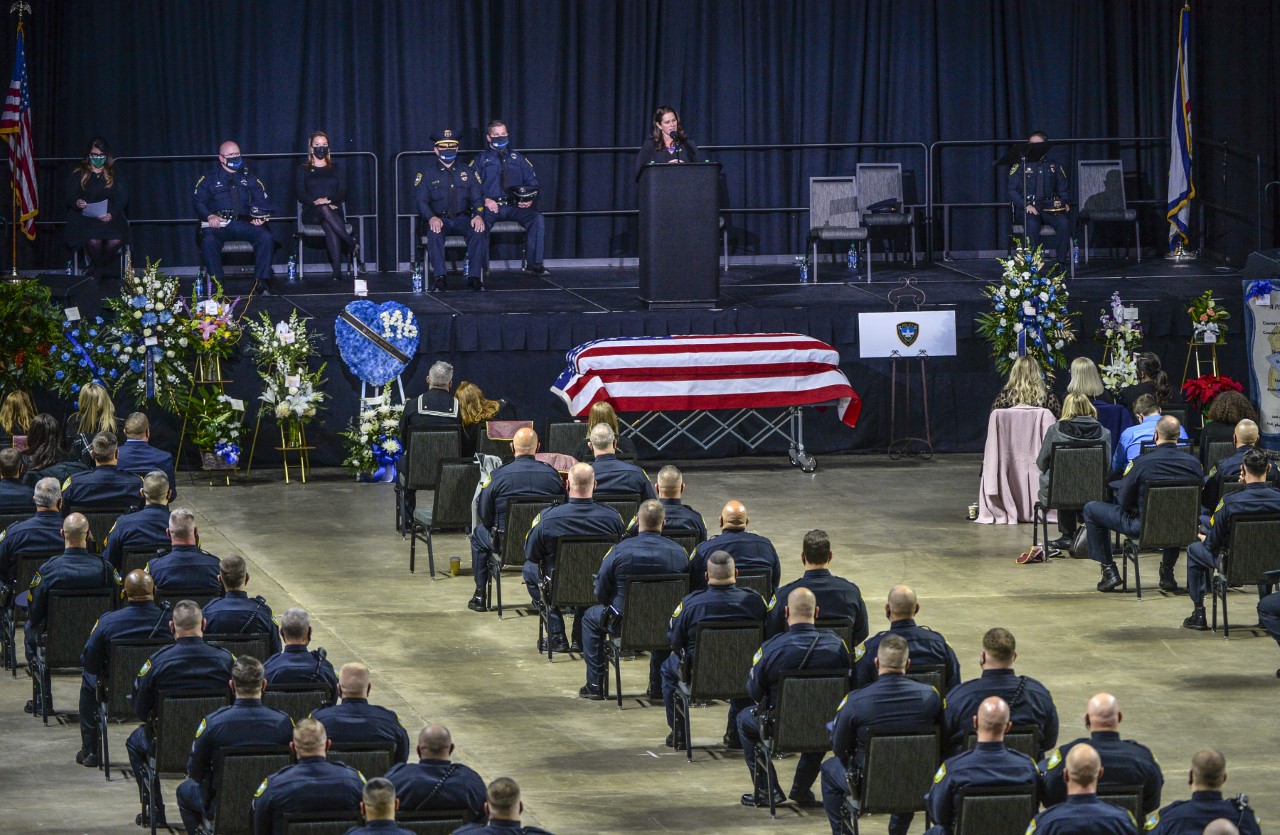 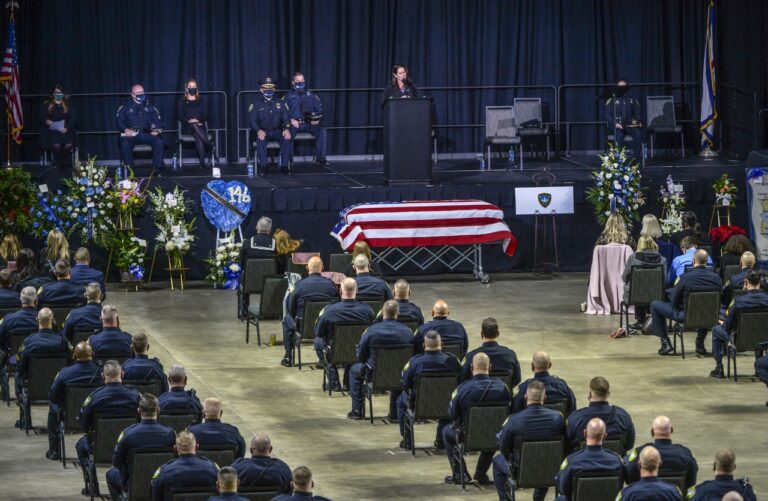 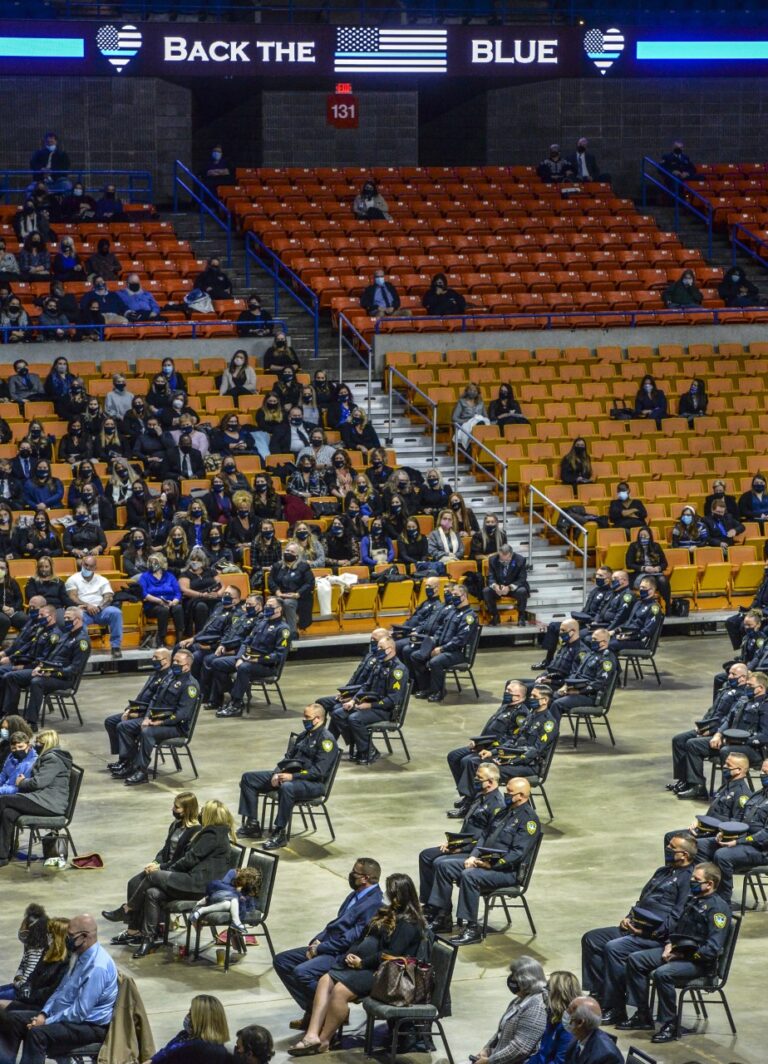 Johnson joined the force in January 2019. She was 28. Jake Flatley/MetroNews

Police officers gather for the memorial service for Patrolman Cassie Johnson, who was shot in the line of duty. Kenny Kemp/pool/Charleston Gazette-Mail

Johnson was fatally shot last week while responding to a routine call. During her funeral today, colleagues said her memory and community influence would live on. And the organs she donated — eyes, heart, lungs — are already helping others carry on full lives.

“Cassie, we will miss you, we love you and we will hold the line from here,” said Cpl. Matt Petty, who served with Johnson on the 20-member Delta shift.

His voice breaking, Petty recalled check-in phone calls from Johnson that seemed routine. “We’d give up anything to be able to get one more,” he said.

Dozens of police officers gathered at the Charleston Coliseum & Convention Center to honor her memory today. They wore badges with mourning bands and, because of the ongoing pandemic, face coverings with her number 146.

Johnson was shot a week ago after responding to a parking complaint on Garrison Avenue. She was taken off life support the next day at Charleston Area Medical Center and died the day after that.

“Make no mistake, Cassie truly lives on,” said Chelsie Sobecki of the Center for Organ Recovery and Education. She described people already benefiting from her heart, lungs, liver, kidneys — and even tendons and anterior cruciate ligament.

“She gave one final gift as a donor, and true heroes live forever.”

Investigators have said the man suspected in Johnson’s shooting, Joshua Phillips, 38, of Charleston, had parked in a driveway that was not his and then went into a home across the street to buy drugs.

Johnson was called to the scene, confronted Phillips, and the situation escalated until they exchanged fire. Phillips, who was shot in the torso, has been treated at the hospital and now faces a murder charge.

Today’s service focused not on the circumstances of Johnson’s death but on the contributions of her life.

“Today, we lay to rest a true hero, an officer who stood for everything that badge on her chest represents. Patrolman Cassie Johnson, sister in blue, you are a hero.”

Johnson was sworn in as a Charleston police officer on Jan. 11, 2019, but had worked hard prior to that to join the force.

She struggled the first time she took the physical ability test. Lt. Autumn Davis recalled noticing Johnson’s efforts and called to ask if she would like help preparing to try again. Johnson accepted the help.

“She never complained or said this is too hard,” Davis said. “When it was time to take the police test again, Cassie was ready.”

Johnson succeeded and joined the force.

About the same time, Amy Shuler Goodwin was preparing to take office as the city’s first female mayor. Friends told Johnson she would receive an unusual amount of public attention as a female officer being sworn in to serve with the new mayor. She would need to be interviewed. Her picture would be taken.

“She looked so calm,” Goodwin said. “She was embarking on a profession she aspired to her whole life.”

Goodwin described a fire just before Thanksgiving that required an all-out response. Johnson was working traffic detail as Goodwin drove to the scene in her private vehicle. As Goodwin pulled forward, Johnson didn’t recognize her at first.

The mayor rolled down her window to identify herself and say hello. Johnson responded, “Oh yeah, well, I’m still going to keep my eyes on you.”

Although her time on the force was short, her fellow officers said Johnson had achieved her dream. The lessons she left were perseverance, generosity, preparation.

“I choose to believe, knowing Cassie as I did, that she would keep encouraging others to follow their dream, to keep fighting the good fight, to never back down in the face of danger and the unknown,” Davis said.

“Little sister, you did so good.”

The service concluded with the ceremonial End of Watch Call, with a dispatch attempt to reach the officer followed by silence.

Attempt followed attempt with no response.

And finally the acknowledgement of loss.

“Unit 146 is permanently retired in honor and memory of Charleston Patrolman Cassie Johnson.”

Bagpipes sounded and officers stood in tribute to the fallen officer.