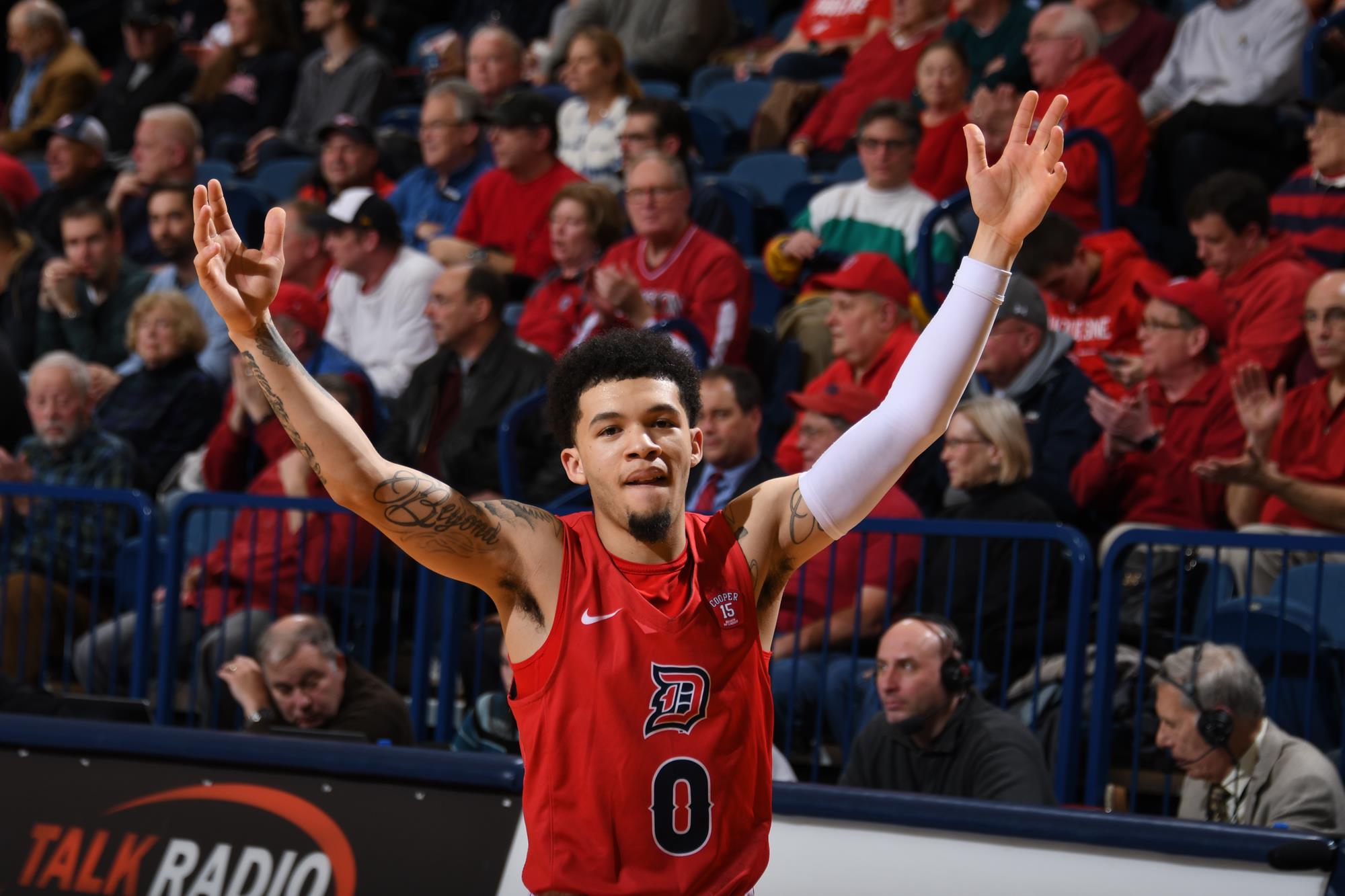 Guard Tavian Dunn-Martin is a fifth-year senior at Duquesne, where he has enjoyed his fair share of success. Photo courtesy of Duquesne Athletics

[Editor’s Note: Due to a positive COVID-19 test among Tier 1 personnel within the program, Duquesne was forced to cancel scheduled games on Dec. 14 and Dec. 16 in Indianapolis.]

This time last year, the Duquesne men’s basketball program was sitting on an 8-0 record en route to winning its first 10 games.

The Dukes ultimately finished 21-9 before their season came to an end prior to the Atlantic 10 Conference Tournament due to the start of the COVID-19 pandemic.

Now two weeks into December of 2020, the Dukes have played only two contests as they try to navigate through a number of challenges across the college basketball landscape.

“It’s been real hectic,” said senior guard Tavian Dunn-Martin, a former Huntington High standout and Bill Evans Award winner as the top prep player in West Virginia. “Right now, we’d usually be about 10 games in and instead we’ve only had two, so we’re just grinding in practice a lot.”

Dunn-Martin, who followed Dukes’ coach Keith Dambrot from Akron to Duquesne following his 2016-2017 freshman season, is simply trying to soak it all in.

“Five years has gone by so fast,” Dunn-Martin said. “I’m just embracing every moment I have now whether it’s in practice or games.”

Forced to pause basketball activities back in October because of a positive COVID test within the program, the Dukes have since had more coronavirus-related issues, causing them to cancel what would have been their most recent game Dec. 4 against Winthrop.

“I feel bad for the players,” Dambrot said. “Between the grind of trying to practice every day with no games and basically not being able to go out to eat or do much, it’s almost like they’re in prison. It’s not a real college experience and it’s been a tough time.”

In the two games Duquesne played, Dunn-Martin struggled in a loss to Arkansas-Little Rock, before excelling in a victory over UNC Greensboro.

Dunn-Martin, the A-10 Sixth Man of the Year back in 2018-2019, had 11 points and seven turnovers in the Dukes’ season-opening setback, but bounced back with 21 points and four steals against the Spartans. Dunn-Martin needed only seven field-goal attempts to pour in the 21 points, making 4-of-6 3-pointers and 7-of-8 free throws as he filled in for an ill Maceo Austin in the team’s starting lineup.

“The first game I was probably overexcited and rushing a bunch of things,” he said. “That second game I calmed down and played how I know how to play.”

For a player who averaged 7.8 points as a sophomore and 10.2 as a junior, it was a breakout performance early in the season.

“He’s such a good player,” Dambrot said. “Even if he is a sixth man, we have to get him more minutes. And even though he’s a fifth-year senior, he’s just starting to scratch the surface.”

Although Dunn-Martin is listed at 5-foot-8, 155 pounds, Dambrot estimates he’s more in the 135-pound range. Dambrot, who coached LeBron James at St.Vincent-St Mary’s High School for two seasons prior to moving on to Akron, then offered a unique comparison about his diminutive guard.

“I had LeBron for a couple years and he’s just as big of a freak as LeBron if you really analyze it,” Dambrot said. “A guy his size shouldn’t be playing at the Atlantic 10 level and playing as well as he does. He’s like the tenth wonder of the world.”

Dunn-Martin, who is comfortable shooting from well beyond the 3-point arc, is also one of college basketball’s best free-throw shooters. During his time at Duquesne, Dunn-Martin has made 116-of-134 free throws.

“He can bomb them in when he gets rolling,” Dambrot said. “He can make other players better. He can pass and handle the ball. He can even be a good defender too. He doesn’t always want to be, but he can be.”

With the Dukes having added two games in Indianapolis next week against Southern Illinois and Loyola Chicago, they’re slated to play three times from Dec. 14-19, with the A-10 opener at Richmond scheduled next Saturday.

“We want to finish top three in the league and win the A-10 Tournament,” Dunn-Martin said. “Conference play starts the 19th against a very good team in Richmond and it’s an early test to see where we’re at and where we need to go. We’re all excited to play.”

As for the future, Dunn-Martin hasn’t yet decided if this will be his final college season. With winter-sport athletes’ eligibility having been extended a year by the NCAA, Dunn-Martin could return to college.

“There’s been some thought of coming back because of everything that’s going on right now,” he said. “Overseas might not be the best opportunity and coming back is something I’ve thought of, but who knows? I’ll wait until the year of the year and decide.”