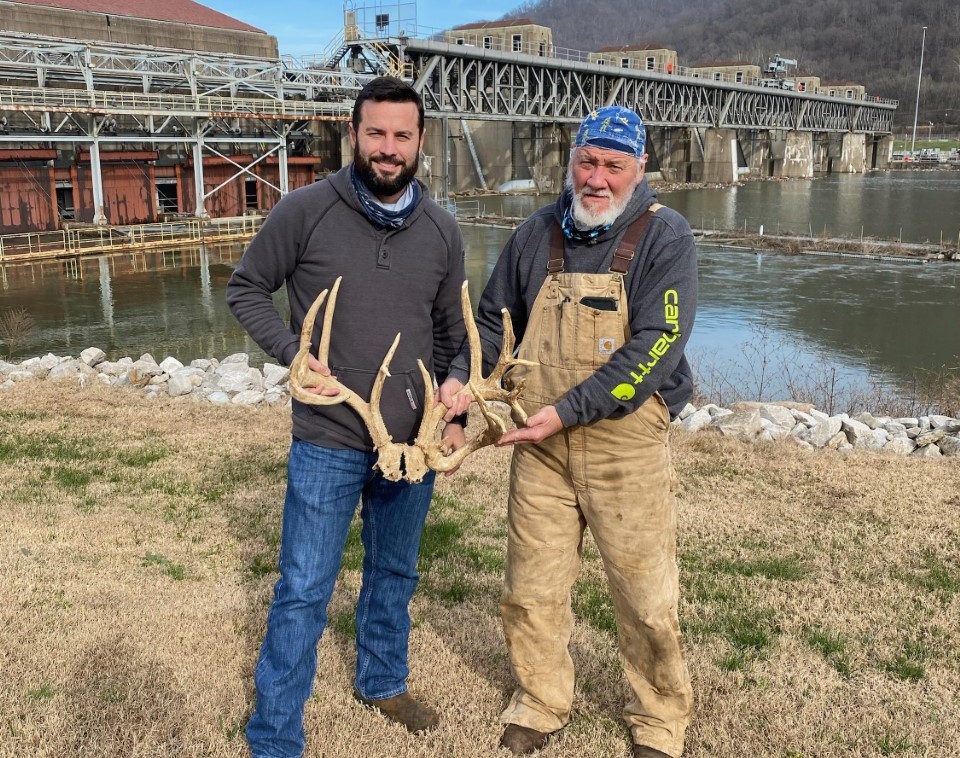 LONDON, W.Va. — Thousands of West Virginia hunters step into the woods every year with visions of bringing home a set of trophy antlers. Josh Blake of Scott Depot is one of them. However, there are far fewer West Virginia sportsmen who go to the Kanawha River and fish out one of the biggest whitetail racks ever recorded in West Virginia. But Blake is one of those guys as well.

Monday, December 7th, was a normal workday for Blake. He’s an employee of American Electric Power and in charge of the grates which protect the intakes at the company’s hydro power facilities on the Kanawha River at the London, Marmet, and Winfield locks. He was working at the London facility running the machine which rakes the submerged debris off the intakes.

“We drop rakes into the river to scrape those screens and Monday morning I pulled up the right hand side of that rack which is now circulating on line. I’m a deer hunter, so when I saw it I knew exactly what it was and I almost jumped out of my skin trying to get over there to get hold of it,” Blake said in an interview for West Virginia Outdoors on MetroNews.

Listen to “Josh Blake on the Mystery Buck of the Kanawha River” on Spreaker.

“I didn’t just walk away from it Monday, I kept dropping that rake for another hour hoping I could pull up the other side of that rack,” he laughed.

Blake knew what he had was a rare nugget of gold. He estimated the one antler alone was close to 80 inches for a rough score, so it was hard to imagine what the full rack might have been. He was fairly certain he’d never know, but just in case, Tuesday he had some help on the job and instructed his workers for the day if they happened to pull up the other side of the rack, it was his. He admitted he didn’t really think the workers would give it to him, but also figured there was hardly any chance of lightening striking in the same place twice on back to back days.

“About 25 minutes after I talked to them, I got a call and they said, ‘We dropped that rake one time and on the very first try we pulled up the left side of that rack, but you’re never going to believe it,” Blake explained.

He was in his truck immediately and headed for the London hydro plant. There, he got the shock of his life. The right side of the antlers which he had pulled a day earlier was fairly typical, the left side was shockingly non-typical for a set of whitetail antlers.

“He’s got a double main beam, with a lot of trash hanging off in every direction. It’s going everywhere. It’s got a little corkscrew off the base. It’s got a lot of amazing character to it,” he explained.

Blake called the DNR’s District 5 Office to see about getting a permit to keep the antlers and maybe getting it scored. When he suggested the rack might score over 200 points, the receptionist was skeptical. Lots of people call claiming to have a 200 plus set of antlers. But things changed when Blake sent a picture.

“The lady said they’d be in touch in a couple of hours. They called me in 12 minutes.,” he laughed.

It took some careful measuring. Since the two sides were separated from the skull plate, it was hard to be certain of the rack’s spread, but when the tabulation was done, the rack scored 191 7/8ths.

“There’s more to it,” Blake shared. “They estimated there’s anywhere from five to seven inches of antler which was broken off.”

A close look at the rack revealed broken antler tips which could have certainly added several more inches to the score. DNR biologists who have looked at the rack believe the deer went into the river while still in velvet.

Due to the circumstances, it cannot be officially recorded into the West Virginia record books. However, as a comparison. The record for a non-typical buck in West Virginia is 231 5/8ths killed by Charles McLaughlin with a rifle in 1997 in Wayne County. The top five all time non-typical bucks in the firearms category are all over 200 inches. However, Blake’s Kanawha River buck would be close to the top 5 all time non-typical archery kills. The number five buck on that list scored 193 1/8th.

“I killed a deer a couple of years ago that scored 149  and that was the biggest deer I’ve ever killed, so I knew what I was talking about,” Blake noted.

The bigger question is where did this monster come from and how did he wind up in the Kanawha River. Those are questions which may never be answered. Nobody can say with any degree of certainty if the buck roamed the steep hills of the Upper Kanawha Valley before he met his demise and was sent to a watery grave. It’s possible he could have been dragged into the area aboard a barge at some point, meaning he could have come from anywhere. It’s also unclear how long the deer had been in the water. River mud and the absence of oxygen worked as a preservative, according to biologists, which protected the antlers. They could have been down there a long time.

“I was sending pictures to a lot of my buddies and they had the same questions. I really don’t know.,” Blake said.

He’s had plenty of suggestions about what to do with the antlers. Some have suggested he have them fashioned into a full mount, but he didn’t believe that was the proper way to tell this big buck’s story.

“The story is the deer came out of the river, the way it is. I don’t foresee having that rack cleaned up and repaired. I don’t know what that deer looked like on the hoof,” he explained. “I’m hoping when this story gets out, maybe somebody has a trail cam pic that tells more of the story. I’m hoping we eventually find out it is a West Virginia deer.”