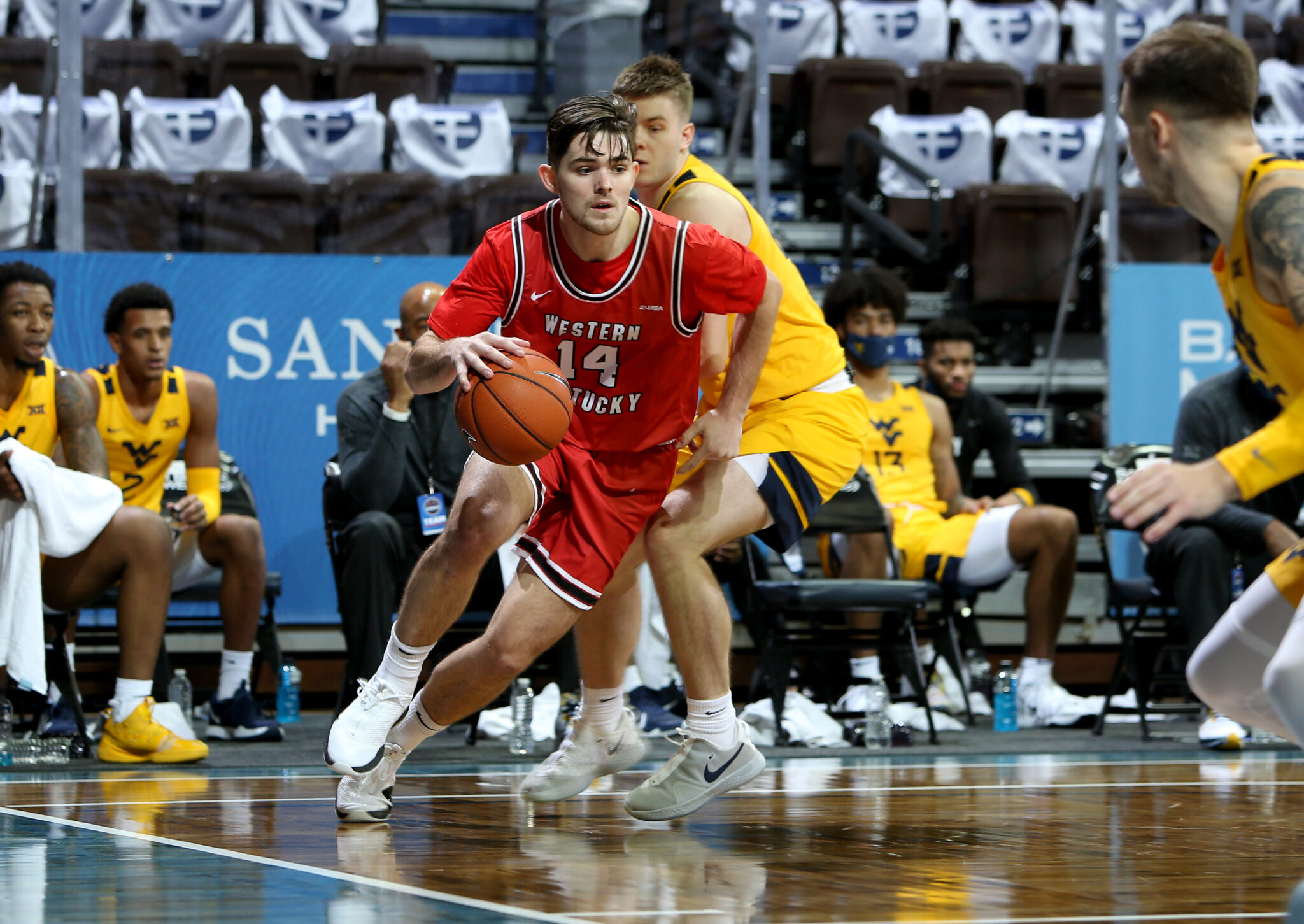 Frampton, now in his fourth year of college, transferred from Davidson to Western Kentucky over the summer and has cracked the Hilltoppers’ rotation for a team picked to win Conference USA in the league’s preseason poll.

“Everything has been good so far,” Frampton said. “Really, I have no complaints. My teammates took me right in as soon as I stepped on campus. Having the veteran group that we have has helped a bunch. They already know what’s going on and they’ve done this for three or four years. Coach (Rick) Stansbury has been awesome and helped me a lot too.”

Frampton, however, arrived to Bowling Green, Kentucky as a plenty proven player at the Division I level.

Although his freshman season ended before it began when Frampton suffered a torn ACL in his left knee while practicing for the Wildcats in September 2017, he bounced back nicely. Frampton averaged 10.3 points in the 2018-2019 season and all but 13 of his 113 field goals were from 3-point range. The 100 3s put Frampton in some rather illustrious company as he joined future Hall of Famer Stephen Curry as the only other player in Davidson history to knock down 100 triples in a season. Frampton’s 100 3s were also tops in the Atlantic 10 Conference that season.

Frampton began his sophomore season at Davidson averaging 9.8 points and making 14 3s over his first five games, but took a personal leave of absence to return home to Poca. He never played again for the Wildcats and legendary Davidson coach Bob McKillop announced over the summer that Frampton was leaving the program for reasons “personal in nature.”

Frampton lost his father, Bryan Frampton, to cancer in December 2013. He also has an older brother, Nathaniel, who was born with several disabilities, including blindness, cerebral palsy and mental impairment.

“I stay in touch with a lot of my former teammates and those are my boys,” Frampton said. “When I chose to transfer, I had a few schools reach out, but coach Stansbury recruited me the hardest. We talked just about every other day and it wasn’t always just about basketball. He reached out to me about life and it made me realize he cared about me as a person and not just a player. Western Kentucky felt like home and I knew it’d be a great fit.”

Seven games into his career with the Hilltoppers, Frampton is playing 23.1 minutes on average in a reserve role and scoring seven points per game. Frampton has made 14 triples to this point, including all five of his attempts in a Dec. 10 win over Gardner-Webb. Thirty-nine of his 45 field goal attempts have been from 3, which is by design.

“When I was transferring and coach Stansbury called me, he said they needed some shooters,” Frampton recalled. “That’s been my role so far. I haven’t shot the ball too well besides one game, but it just comes down to getting back in the gym and making sure my shot stays right.”

The Hilltoppers (5-2) have already beaten Northern Iowa, Memphis and Rhode Island, while suffering losses to West Virginia and Louisville in the earlygoing.

Facing WVU in the final of the Bad Boy Mowers Crossover Classic was a unique experience for Frampton, who won a state championship at Poca in 2015.

“It was awesome getting to play against the big, homegrown college team,” Frampton said. “That’s what it’s all about and what I signed up for. In college basketball, you’re going to play against opponents you enjoyed watching when you were younger. My brother (former Marshall and Glenville State player Noah Frampton) actually Tweeted to me ‘Let’s Go Mountaineers’, and I thought that was pretty funny.”

Frampton scored six points on a pair of 3s in WKU’s 70-64 loss to the Mountaineers, which the Hilltoppers led for a good portion of. WKU’s lone lopsided loss to date was a 75-54 setback at Louisville and the Hilltoppers are scheduled to play at Alabama on Saturday.

“Getting big games in like that shows how good we can be,” Frampton said. “We’ve played great basketball at the start of the season. We had a hiccup at Louisville, but we’re 5-2 right now with a couple big games coming up.”

Frampton, fifth in minutes on a WKU team with nine players averaging at least 10 minutes of playing time, is pleased to be a Hilltopper several years after Stansbury recruited him during his playing days with the Dots.

“He recruited me a little bit late and I’d already pretty much made up my mind that I was going to Davidson,” Frampton said.

Balance is a big part of the Hilltoppers’ success as eight players average between five and 16.4 points. Frampton’s seven-point average is currently fourth on the team, while he has nine more 3-pointers than any player on the roster.

“It’s not about me. It’s about the team,” Frampton said. “As long as we win, that’s all that matters. I know coach Stansbury and this program are about winning and that’s why I joined.”