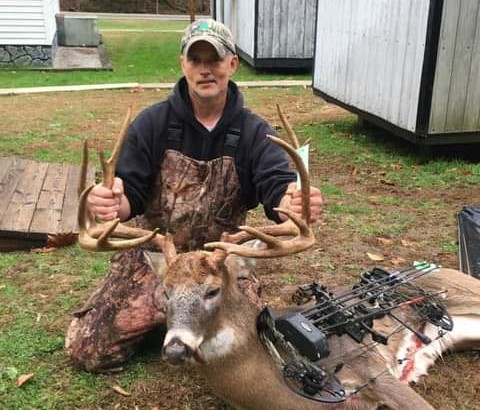 Doug Harvey of Cyclone, W.Va. with the massive School House Buck as locals had nicknamed him.

CYCLONE, W.Va. — A three year quest for a Wyoming County hunter finally culminated in success during the 2020 hunting season. Doug Harvey of Cyclone, W.Va. had  been after the bruising buck everybody around his area had nicknamed “The Schoolhouse Buck.”

“Guys around here know this deer. He’s the School House Buck because this is the area he came from,” Harvey explained in a conversation with West Virginia Outdoors.

The area is around Road Branch Elementary and Middle School in Wyoming County. He wasn’t a shy buck and just about everybody who hunts in that part of Wyoming County was well aware of and after him.

“Back in 2018 I got a bunch of trail cam pictures of him and there’s been a few others after him too who had pictures,” Harvey explained.

“The night before I killed him a guy came down the road and actually saw the deer in my yard!  I’ve got several stands up on the hill here and I figured I might have a chance,” he explained.

Harvey hunts on a piece of property behind his dad’s house. He has several stands on the hill which was severe terrain, almost “straight up and down” as he explained. Harvey had hunted the “School House Buck” exclusively since the 2018 season. He estimated he passed up 15 to 20 bucks during those three seasons waiting on the prize, and always worried somebody else would get him first.

Listen to “Doug Harvey talks about the School House Buck on WV Outdoors” on Spreaker.

“Oh yeah, I think that’s a fear that every hunter has,”

He was also limited in his ability to pursue the deer in 2020 since he was busy taking his dad to doctor appointments and tending to his needs. Harvey got to his stand any free moment he could steal and the day after the big buck was spotted in his own yard, he headed that way just as soon as he could, which was around 8:30 a.m. He never made it to the stand.

“I was actually on my way to the stand when I spotted him. I heard a twig break behind me and I turned around and there he was about 15 or 20 yards away with his nose to the ground coming toward me,” Harvey shared. “I took the shot and he ran about 25 yards and fell over. It happened so fast I didn’t have time to get nervous.”

The incredible buck had 14 points in an almost perfectly symmetric rack. The only flaws were a couple of brow tines, both broken in apparent fights with rival bucks. It turned out the buck had been working the mountainside all night. Harvey had several trail cam pictures of him taken just hours before the encounter.

Although he’s killed some nice bucks in the past, Harvey admitted, this was the biggest and probably the most rewarding.