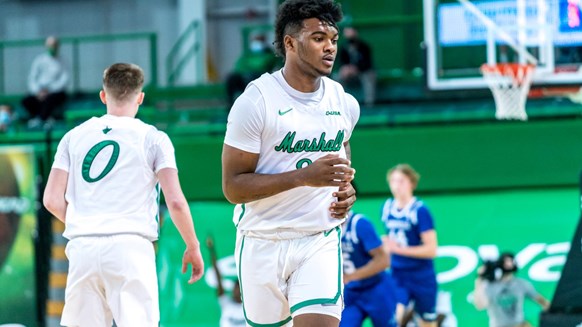 As both a junior and senior, Early averaged more than 27 points per game for the Wildcats, helping him earn Class AA first-team all-state honors both seasons and putting him on the radar for Division I coaches.

Early chose to stay close to home and wound up at Marshall, where he is one of eight players to see action in all eight games the Thundering Herd (6-2) have played this season.

“I’m learning, taking everything in and I’ve gotten better,” said the 6-foot-4 guard. “I’m getting used to the pace.”

In a reserve role, Early is playing 5.6 minutes per game and averaging 2 points. He has made 6-of-16 field goal attempts, including 3-of-9 from 3-point range.

“On offense, I need to slow down and play my game,” Early said. “I’m trying not to force anything. On defense, I’ve done pretty well, but I can always get better and quicker.”

At 249 pounds, Early has a thicker stature than the majority of players getting acclimated to college basketball.

Although his frame often helped Early have his way in high school by getting high percentage shots, scoring doesn’t come near as easily at this level.

“There’s more length and people are stronger and taller,” Early said. “There’s a bunch of adjustments to make.”

Still, while adjusting to the Division I level, Early has managed to crack the rotation for the Herd, who look to avenge Friday’s loss to Louisiana Tech when the two teams battle again tonight.

“He’s surprised me with how well he shoots in practice,” Marshall coach Dan D’Antoni said. “He hasn’t gotten a lot of chances in games, but I expect him to be a terrific scorer.”

While recognizing Early’s ability to score and play multiple positions, D’Antoni believes he will only add quickness and improve by shedding weight.

“David is a creative scorer, he’s very strong and he can play [point guard, shooting guard or small forward],” D’Antoni said. “He needs to shed about 10 pounds to get in the shape he needs to be in, and once he does that we have a really solid player for the future.”

Early has scored in five of his eight appearances, with a six-point effort in a win over UNC Asheville his highest scoring output.

Along the way, Early benefits from going against a talented trio of experienced Marshall guards — Jarrod West, Taevion Kinsey and Andrew Taylor — in practice, while also being able to learn from his backcourt mates.

“My goal is to continue getting better every day,” Early said, “and when I get my name called, work and do everything I can to contribute and help the team win.”