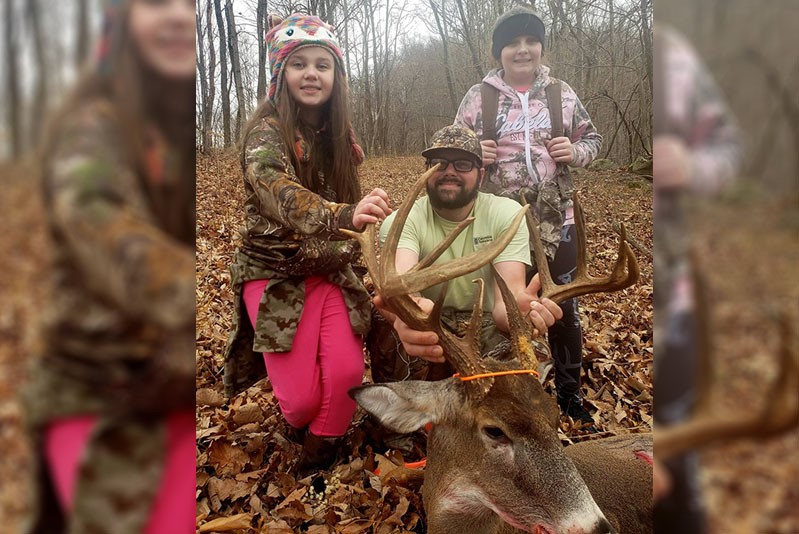 LOGAN, W.Va. — What seemed to be a run of bad luck for one Logan County hunter in the 2020 archery season morphed into one of the greatest years he’s ever enjoyed in the woods.

Aaron Fry was after a buck he missed in 2019. A freak slip caused his arrow to fly low on the solid 8 point monster he had been watching. During the 2020 season, Fry got another chance to take the same buck and thought his shot was perfect.

“I backed out and got some help to come back an look for him. We spent the better part of a week looking for that deer. I wear a smart watch and I walked 27 miles on an 80 acre piece of land looking for this deer during one week,” Fry said of his misfortune on West Virginia Outdoors.

Despite the well placed shot, Fry found very little blood and after a week or ten days of searching finally had go give up on the massive buck. He was dejected and exhausted after making every effort to track down the buck before returning to the woods with his bow. Things took a turn for the better when he climbed into his stand on the Friday after Thanksgiving.

The weather was crisp and cold with no wind. It was the perfect day to see deer, but Fry didn’t seen any. He had “honey do’s” a plenty to get to at home and had become so complacent he allowed his feet to hang over the edge of his stand and was actually formulating a Wal-Mart grocery pickup list on his phone when the day started to get real.

“It was about like I was in a recliner and something caught my eye down on the point. It was a deer, but I couldn’t even tell it was buck at that point,” Fry explained. “He kept working up the point and then the sun caught his rack and I thought, ‘Oh man, that’s the deer I shot!'”

But, it wasn’t. As the buck kept on his trek along the top of the ridge toward Fry, it became more and more obvious this was a different buck–but with similar antler features.. All the while, Fry was  trying to adjust himself, stand up, get his bow in position and not to be noticed.

“He followed the script and walked to within a 20 yard chip shot and stops. Then he looked in my direction. I’m sitting with my bow half drawn, right before the cam rolls over. It seemed like he looked at me for 10 minutes and I knew I was going to have to let the bow down or my shoulder was going to come out of the socket,” he said.

Finally, the buck looked away and Fry was ready to go to full draw, but he had held so long his arm was numb. He explained he had to use his chin and index finger to find the strength to get the bow fully drawn.

“Hey, it worked!” he laughed

He released the arrow and it found its mark. The buck kicked and took off out the point, but suddenly stopped. Fry explained the buck would walk and stop, walk and stop, and walk and stop until it was out of sight. All were good signs, so Fry got on the phone to share his story. Most of his past bucks have been killed in the evening and the tracking had to be done in the dark or early the next day. But this time it was the day after Thanksgiving and 9 a.m.

“That’s where this story gets good. I have two daughters and they never get to go help me with the track job, but this day they were out of school and it was early in the day. So we all went back to the woods. and they got to help track it. We had good blood and it wasn’t a very long track until we found him,” said Fry.

The excitement was doubled when Fry realized the buck he had killed was much larger than what he had anticipated. The rack carried 13 scoreable points and would gross 169 inches as a typical rack.

“This was probably one of the most memorable bucks I’ve ever gotten to kill. My girls got to help on the track job. They were excited and it was super, super memorable for me.”