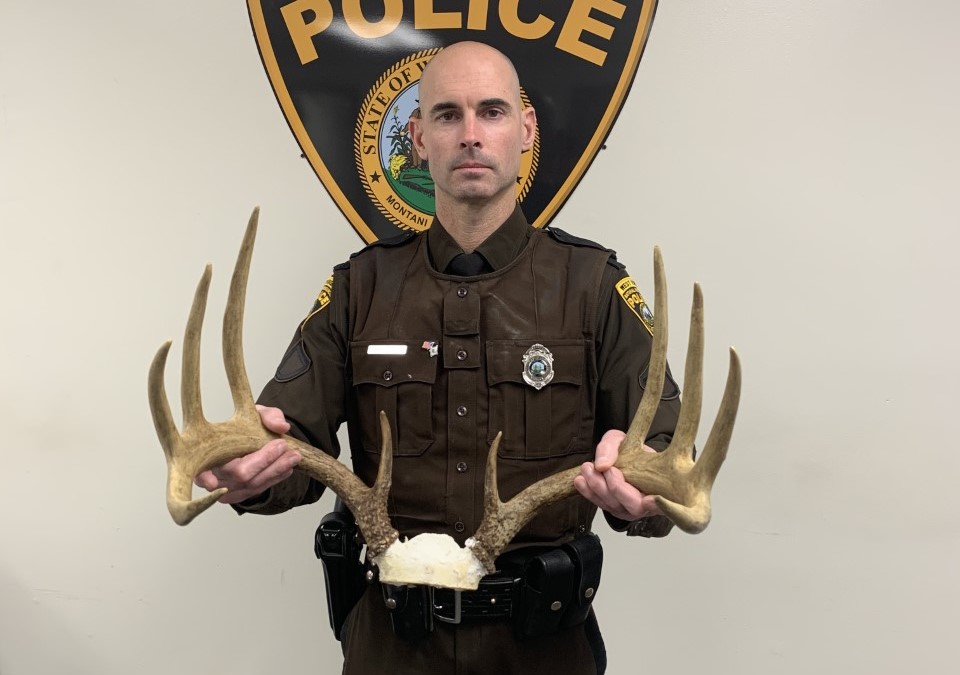 PINEVILLE, W.Va. — A Raleigh County man is paying a heavy price after his decision more than two years ago to pursue a giant buck in Wyoming County.

Natural Resources Police Officers Joshua Toner and Cody Frye investigated the case and charged Smith with a total of 21 counts. Toner was first alerted to the case when he received information from a source about the buck being shot with a rifle in Wyoming County at night. Such a charge typically generates considerable buzz since Wyoming County is one of four counties in West Virginia which are restricted to archery only hunting for deer.

“The informant said he had heard the deer was shot at night with a rifle in Wyoming County and several other people had also heard that same story,” Toner explained.

The claims surfaced when the buck was brought to a Raleigh County taxidermy shop. Toner questioned Smith about the allegations. Smith claimed to have killed the buck legally with a bow and checked it in as an archery kill.  However, Toner said his investigation produced evidence which dispelled Smith’s account of the story.

“He said he killed it legally and he did check it in, but we ended up getting some witnesses who were there when that took place,” Toner explained. “Of course we were also able to get a jacket fragment out of the cape and prove it was a rifle kill.”

The criminal complaint indicated the violation was even more serious. According to court documents, Smith shot the buck using a spotlight at night from a side-by-side UTV. Toner in the complaint also indicated the incident occurred on leased property in Wyoming County where the lease holders had already run Smith off several times.

“He’d been made aware of that deer and the night he killed it was the third night he’d been down there. He had a partner with him and they unloaded their side-by-side, drove up there, found the deer, and shot it with a rifle,” Toner said.

“He was trespassing. This property was part of a hunting lease and he’d been told not to be up there evidently a few times. It was killed on that property he was told not to be on.” he added.

There was more. Natural Resources Police said Smith often had dogs with him at times he was in the area looking for the buck which would  serve as as a ruse to claim he was actually coon hunting during pursuit of the buck. According to the DNR, Smith paid an acquaintance who lived in the area $100 to keep an eye out for that particular deer he had targeted and alert him when it was seen. Investigators said on the night the buck was shot, Smith was nervous since it happened not far from a residential area where the shot may have caused concern. Officers said Smith went to a neighbor’s residence and made a fake 911 call to distract a police officer in the area and make a clean getaway.

Smith’s accomplice was Jeffrey Perdue, 32, of Surveyor, W.Va. He was convicted of several charges tied to the case and fined $540.50. Despite Perdue’s involvement, officers said Smith was the one who orchestrated the scheme and pulled the trigger.

The case was tied up in Wyoming County Magistrate Court for nearly 25 months. Officials say a huge part of the delays dealt with Covid 19 issues and scheduling of witnesses.

Smith entered guilty pleas to one count each of hunting from a motorized vehicle, trespassing, hunting, fishing, or trapping on the lands of another, hunting out of season, illegal possession of wildlife, and an enhanced penalty for the illegal killing of a trophy deer. The last charge was enacted a few years ago to strengthen laws and hopefully act as a deterrent to poaching. The measure significantly increased Smith’s final payout and fine. He was fined and assessed replacement fees of $2,901.50. The total included a $1,500 enhanced penalty for killing the trophy buck. His hunting license will also be suspended for an indefinite period of time.

However, he could have had it much worse. As part of the plea the following charges which had been originally leveled against Smith were dismissed: three counts of spotlighting, three counts of hunting deer a half hour before/after sunrise/sunset, two counts each of hunting from a motorized vehicle, hunting, fishing, or trapping on the lands of another, and trespassing, There were also charges originally filed against Smith for conspiracy to withhold information from an officer, violation of the electronic game checking system, and having an uncased firearm 30 minutes after sunset. All were dismissed in the plea agreement.

The incident occurred in 2018. Since then, the West Virginia Legislature upgraded the enhanced penalties for poaching trophy deer again to an even steeper level. While Smith was assessed a $1,500 enhanced penalty, that same deer killed illegally today would carry an enhanced penalty of $5,000.

The buck’s rack was confiscated and forfeited.