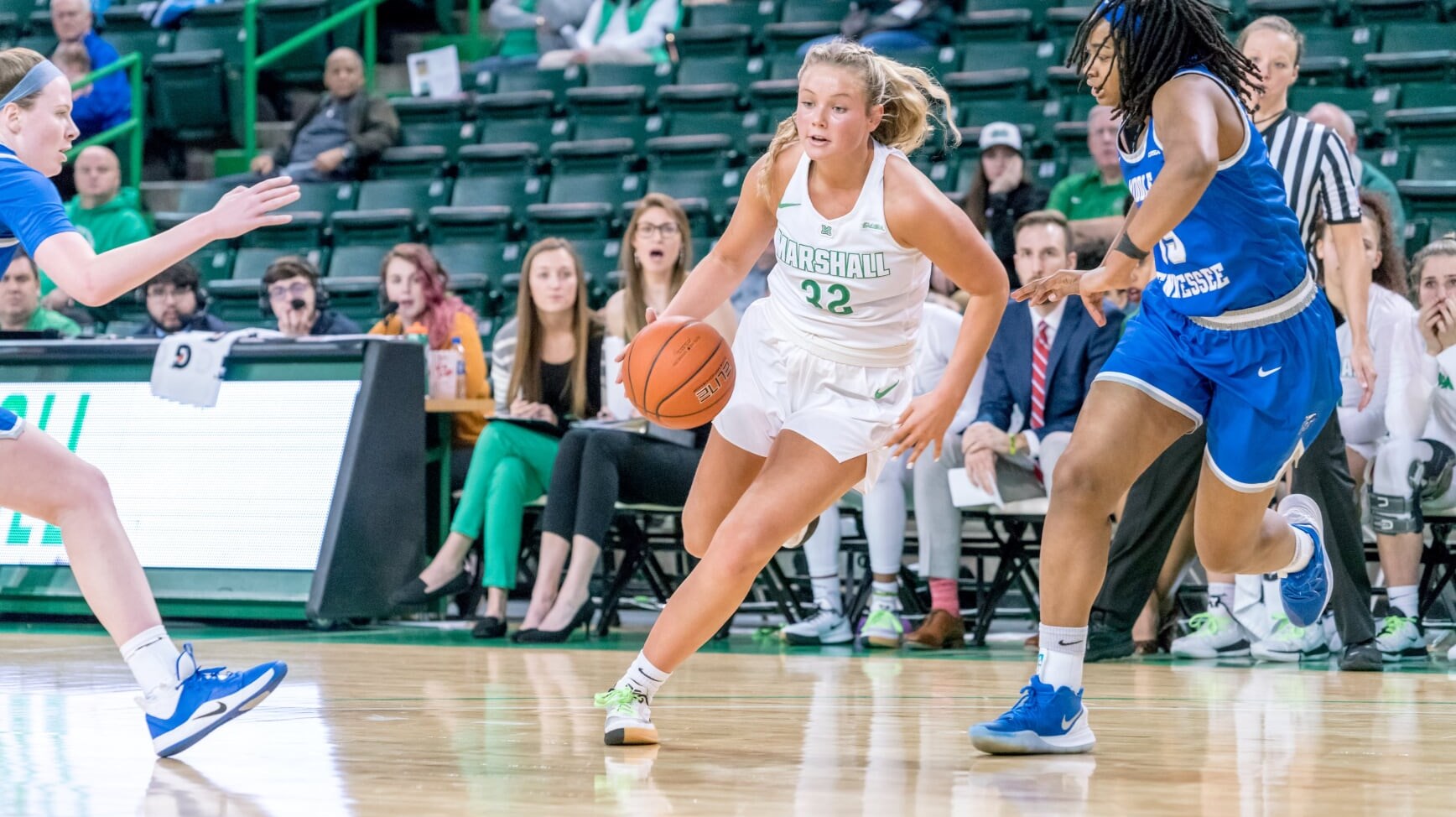 Paige Shy is playing an average of 21.1 minutes in her sophomore season at Marshall. Photo courtesy of Marshall Athletics

Paige Shy thinks back to this time last year when she was a freshman at Marshall — one that would play 11.5 minutes on average and see action in 28 of the Thundering Herd’s 30 contests.

“Last year was a learning year for me and I tried to test the waters for what I could do at this level,” Shy said.

Shy was ultimately ninth on Marshall in scoring at 3 points per game, making the sixth most 3-pointers with 18 and contributing 2.3 rebounds on average.

“Getting reps in games helps set the tone for confidence and it’s helped this season as far as being more advanced and experienced,” Shy said.

Although Shy’s numbers are fairly similar to what they were a year ago through Marshall’s first 10 games, the former St. Joseph Central High School standout has seen her role expand as a sophomore.

Shy is playing more than half the game on average (21.1 minutes) and has increased her scoring and rebounding to 4.4 points and 3.4 boards. Her 26 defensive rebounds are fourth on Marshall, while Shy’s nine 3-pointers are tied for third. Although Shy hasn’t shot the ball as well as she’d hoped to (12-of-41 from the field), the 5-foot-10 Huntington native has found other ways to contribute.

“I want to do everything I can to help us win,” Shy said. “I’ve played some (power forward) and whatever position they need me to play, I’ll play. Shooting is one of my best abilities and my rebounding ability has been pretty good too. I just try to support everyone and be there for my teammates. At this level, you have to support each other even more.”

Shy has been a starter in four of her nine appearances this season, including an 11-point effort with three triples in a win over Louisiana Tech back on January 2.

After finishing 13-17 a season ago, Marshall is off to a 4-6 start. The Herd has yet to win consecutive games, something that could change Friday with the first of two scheduled weekend tilts against Old Dominion. It would mark Marshall’s first game since January 23 and ODU’s first contest in three weeks.

“There’s been a lot of adversity this year, but I think our team handles it pretty well and everyone just has to be ready,” Shy said. “You don’t know who will be ready or available and the lineup can change the day of the game. You have to believe in your teammates, because all five starters could be out. But we have steady heads and do really well with supporting each other.”

As the only West Virginia native on Marshall’s roster, Shy is also in a position many of her teammates don’t find themselves in being close to home.

“This year especially has made me appreciate that more,” Shy said. “Some of my teammates haven’t seen their families in months and I can go 20 minutes to see my family. If I want a home cooked meal, I can call my mom. It’s great to see my family in the stands as well.”

During her memorable prep career at St. Jospeh, Shy became accustomed to two things — competing for a state championship and earning all-state accolades.

She was part of Class A title-winning teams in 2017 and 2019, while the Irish finished runner-up in 2016 and 2018. Shy was a Class A first-team all-state pick as a junior and senior, while she earned second-team honors as a sophomore and was a third-team selection as a freshman.

In her final high school game, Shy made a state tournament record eight 3-pointers and scored 28 points to lead the Irish to runaway victory over Parkersburg Catholic.

“I know St. Joe definitely brought me a family of teammates and we all still support each other like no other,” Shy said. “I miss them like crazy.”