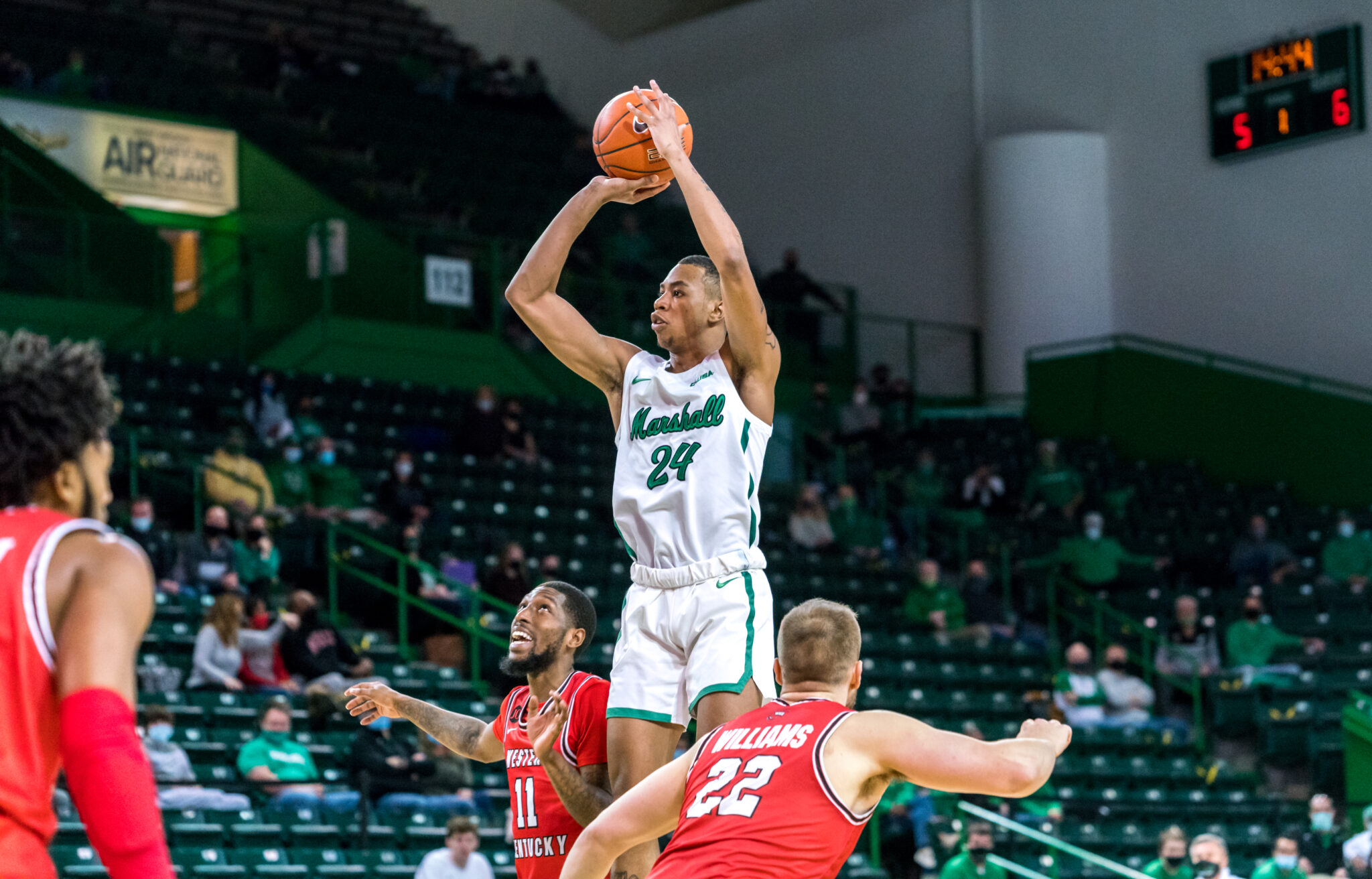 NORFOLK, Va.  – Marshall finished what it started this time.

Marshall raced to a 48-30 lead at halftime Saturday night and closed in a big way to prevail, 87-67, in Conference USA play at Chartway Arena. Domination by the Monarchs on the boards triggered the Friday rally, but the Herd stayed even with the home team on the boards this night.

“”We made our presence known inside,” Marshall head coach Dan  D’Antoni said after the win. “They (Marshall) were getting bully-balled last night, it was a good effort tonight.”

Andrew West and Jarrod West tied for scoring honors with 18 each and Taevion Kinsey followed with 17 and Goran Miladinovic 10 off the bench. Taylor added eight assists and a team-high seven rebounds. West made 5-of-6 from behind the arc and had six assists.
In the first half, Kinsey made all seven shots and West 5-of-7.

The Herd’s Jannson Williams had one blocked shot and is now tied with Hassan White for the program record at 182.

Marshall is 5-0 when it has four players score 10 or more points and is 8-2 when scoring at least 80 points.

Marshall returns home next weekend for a C-USA series against Middle Tennessee State. It will bea the Herd’s first home game since Jan. 17.
D’Antoni knew what went wrong in the second half Friday and his players had what it took this time to avoid a repeat.

“Quiet,” he said about the locker room. “Determined in not having the same outcome again.”

D’Antoni also had kind words for West, Kinsey and Taylor.

““Taevion was unbelievable in the first half. When they’re on, that’s 3 of the best guards. They’re tough to handle.

“The big thing is we came with our energy. Ball movement was good, the pick would come. We didn’t wait. It opened the floor. When they’re active, I’ve got all the confidence in the world.”

Kinsey, the league’s No. 1 scorer, said there was no backing up in the rematch.

“They bullied us the whole night, collectively we thought we had to not get bullied today,” he said. “I don’t think we got beat offensively by them, we just got bullied on the board. We knew coming into this game what we had to do. We came out with the same energy we had the in the first half, we played way more physical. We went out there and we did it.”

“That’s one of the main keys this year, is being able to turn around,” Taylor said “I think the main difference was rebounding. We can live with missing shots but not with people pushing us around.”

Austin Trice led Old Dominion (9-5, 5-3 C-USA) with 16 points. Due to the Coronavirus pandemic and COVID-19 protocols, attendance at ODU home games is limited to 250.

“Marshall played at a very high-level tonight,” Monarchs coach Jeff Jones said.”We didn’t have the energy, activity and aggressiveness tonight and with Marshall playing as well as they were, it wasn’t our night. Unfortunately, sometimes when you compete long enough, you understand that you are going to have nights like this; they are not fun, but you have to take your medicine.”