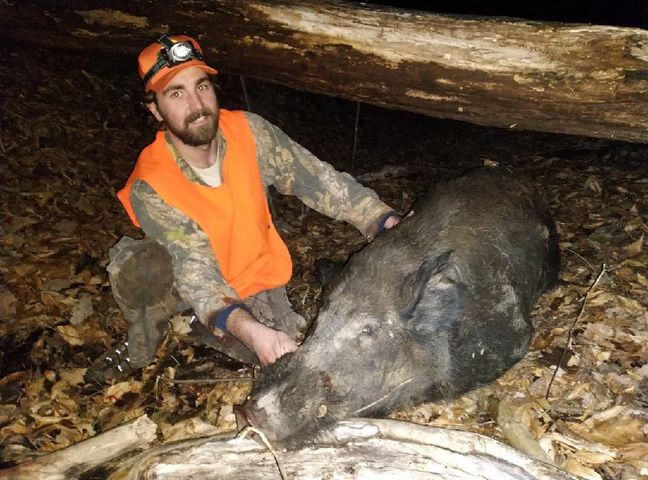 Jacob Shoemaker of Keyser, W.Va. with the massive boar killed during the recent wild boar season in Logan County.

KEYSER, W.Va. — Jacob Shoemaker and his buddy Ryan Leedom often talked about going on a wild boar hunt in southern West Virginia. The Mineral County natives had never hunted in Logan County. Shoemaker, who works in the environmental field, had only been to Logan County one time as part of his job working to eliminate invasive species of plants. Otherwise both were largely in the dark about what lurked in the steep hills of the southern West Virginia coalfields.

The two of them, friends since college, decided to apply for a special lottery hunt put together by the West Virginia Division of Natural Resources on property owned by Western Pocahontas Land Company in southern West Virginia. The company sought to allow a limited number of hunters onto the normally closed land to hopefully kill some of the wild boar which have grown too plentiful. Both Leedom and Shoemaker wound up drawing a permit. They showed up the first day of the three day season unsure what to expect. According to Shoemaker they had no opportunity to scout and picked their initial hunting spot by looking at a topographical map.

“My buddy actually picked the area where we were going to go. I owe it to him,” laughed Shoemaker in a conversation with MetroNews.

“We couldn’t scout prior to Friday, but once we got in there we saw plenty of sign,” he explained.

Shoemaker set himself up on a high ridge and Leedom picked one a few hundred yards away.

Saturday evening of the three day season a massive boar travelling solo rolled through only a few yards away from the position his buddy suggested. Shoemaker explained it all happened fast and started with a quick check on how the WVU-Kansas basketball game was going.

Listen to “Jacob Shoemaker of Keyser, W.Va. talks about his southern W.Va. hog hunt” on Spreaker.

“I was checking my phone and keeping up with West Virginia beating the Jayhawks. I was getting ready to get up and move to another spot for the evening,” he said.

“When I first saw him he was just trotting along, and then for whatever reason he stopped and looked up. I’m not sure if he winded me, but as soon as he stopped I shot and he ran about 30 or 40 yards and piled up,” Shoemaker said.

Leedom arrived quick enough to get some pictures and help his buddy drag home the bacon, which ended up being about a 500 yard drag through thick cover. Fortunately it was all downhill.. As is customary for Logan County, a lot if it was almost STRAIGHT downhill.

Although unlikely he’ll get another opportunity to hunt the private land designated for this special hunt again, Shoemaker said they were looking forward to giving southern West Virginia boar hunting another try next season.

“I think we learned a little bit about them as far as where they hang out. I think we’re definitely thinking about going back and trying them again,” he said.