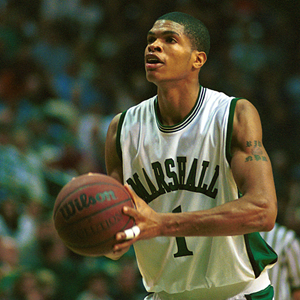 Slay was selected by the New Jersey Nets in the 2002 NBA draft and he would later play for the Charlotte Bobcats. Now a coach at the prep level at United Faith Christian Academy in Charlotte, N.C., Slay will be part of a group starting up AAU programs in Beckley.

“The opportunities I have been blessed with, I have always said I want to give kids in West Virginia those opportunities as well. I was fortunate enough to get several bids from the Under Armour travel ball circuit,” Slay said in an interview with Fred Persinger II on the WJLS News Network.

“We want to help these kids grow, develop and give them opportunities. Nike and Under Armour are probably two of the most competitive travel ball tournaments the country has. For these kids from Southern West Virginia to get an opportunity to play against the best in the country is something I hope they get excited about.”

Slay will be setting up a pair of teams that will be based in Beckley and will compete at the fifth and seventh grade levels.

“That’s a great age. You’ve got kids that are right about to go into middle school and you have kids that in a couple years will be in high school. For them to get a taste to see what the best in the country look like, I know me and most athletes are competitive. So once you know what you are up against, you now know how hard you need to work. That was always a great measuring stick for me.”

AAU basketball is a prime recruiting ground for young basketball players to catch the eye of college coaches, even at middle school ages.

“Once you get into these circuits, these are the tournaments that the colleges come to. This is the Mecca of college recruiting. Kids will get ranked, they will get looked at and they will get opportunities.”

Slay has also worked with the NBA Players Association. He is excited to get an opportunity to give back to the community that cultivated his talents to becoming successful at the college and professional levels.

“I have had so many wonderful experiences and relationships through the game of basketball, it would be selfish of me not to share and try to give that back.

“When you are in Beckley and southern West Virginia, you see what you see. That’s something we need to do a better job with, kind of bragging about ourselves and what we can do.”

“I keep up with coach Kidd and all those guys. My nephew moved back down and just to see what they had to do to navigate and stay together as a team with workouts and things like that, that’s a key factor for them having a great season. They really want it and I know for a fact they are a close-knit group. Not only are they hungry but Ron Kidd is hungry as well.”