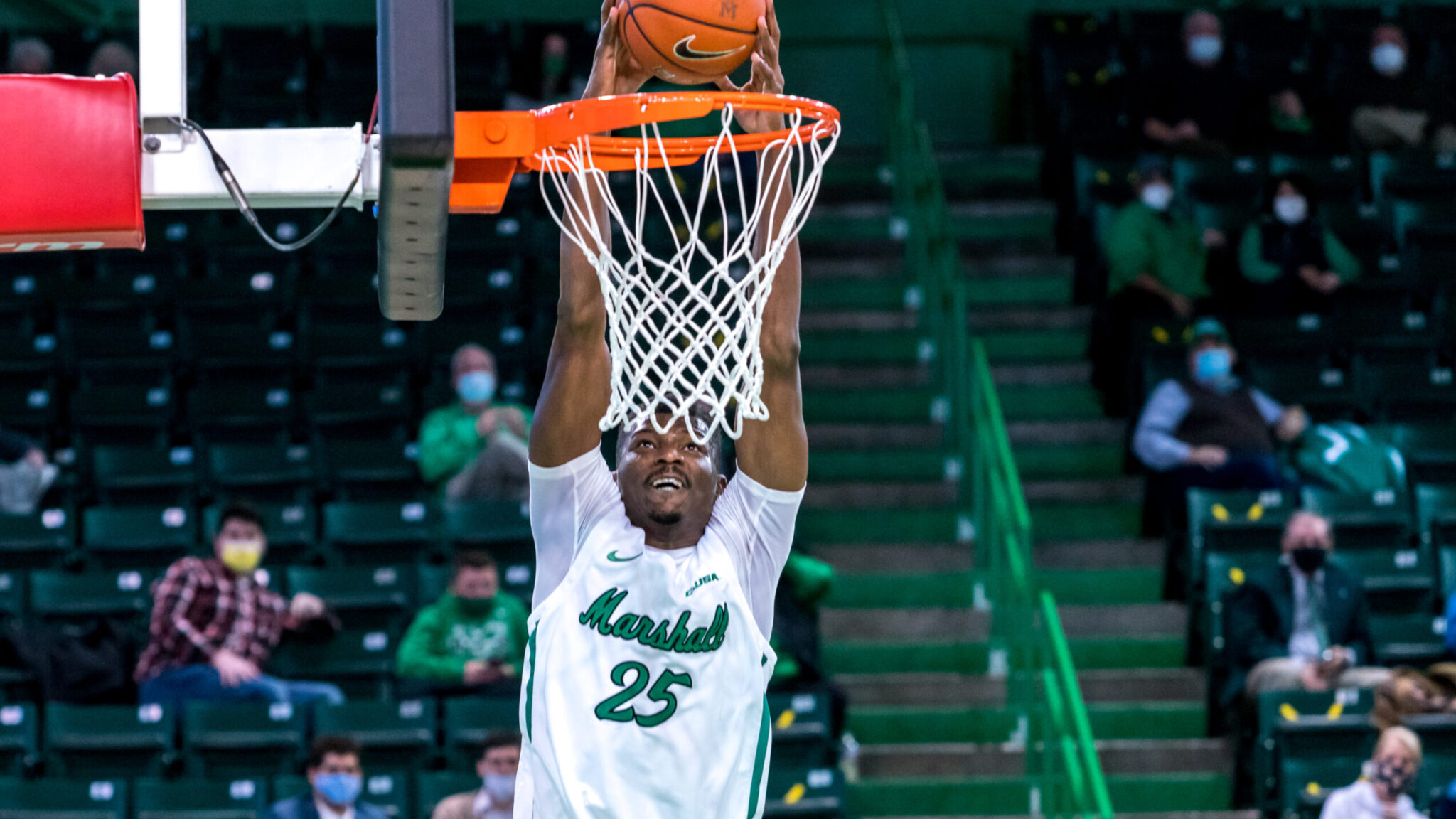 HUNTINGTON  – After the first five minutes of play, Marshall had a zero on the scoreboard. When the final horn sounded, the Thundering Herd had rung up a season-high in points and its patented three-point shooting.

Marshall recorded a season-high 15 three-pointers and after the lackluster start, it just blew past Middle Tennessee State, 107-79, in Conference USA play Friday night at Cam Henderson Center. The Herd’s previous high in points was 89 in a win over FIU on Jan. 23.

“Bad coaching the first four minutes,” Herd coach Dan D’Antoni said on the radio post-game show. “Looked like we’d not seen a ball. Can’t do that. We worked it out today. Got to be ready tomorrow. They’ll remember the beatdown. They’ll really come out hard.”

Marshall and the Blue Raiders meet in the second half of the C-USA weekend twinbill today at 4 p.m. The game is live on ESPN+.

Marshall (11-5, 5-4 C-USA) had four players reach double figures. Taevion Kinsey led the charge with 25 points on 10-of-15 shooting. He went scoreless the first seven minutes. Andy Taylor added 16 points and Jarrod West and David Early 15 each. It’s a career-best of Early, who got all the points on threes (5-of-7).

West had eight assists as well to reach 400 for his career. Taylor added eight assists and Marshall finished with a season-high 23. The Herd chalked up 62 points in the second half, another season high.

“Everyone who went in contributed, not take away,” D’Antoni said. “Not just maintain, but build. We’re shooting the ball like I see every day.”

This is the 15th time the Herd has scored 100 or more points in a game under D’Antoni. This was the Herd’s first home game since Jan. 17.

Midway through the first half, the Herd’s Jannson Williams blocked a shot to become the program’s career-leader in that category with 183. He added another to reach 184. Hassan Whiteside, who now is with the Sacramento Kings  in the NBA, had the record with 182 (2009-10).

Middle Tennessee started off with a 14-0 lead, then got it to 17-2 on a three by Jo’Vintae Criss with 14:33 to play. The visitors entered the game last in the league in field-goal shooting.

Then it was here comes the Herd behind good sparks off the bench from Early and Darius George. And part of the comeback had to be attributed to the lecture D’Antoni gave his team during a timeout with 15:06 left and trailing 14-0.

“It was weird. Looked like we hadn’t played,” West said. “We found our shot.”

Kinsey said he knew the team would figure things out over the long haul.

“Excited to be home,” he said. “That didn’t rattle us. The crowd’s with us. It’s pull ourselves back. Told the team after the game we can’t start like that tomorrow. I expect them to come out mad.”

George and Early each had eight first-half points as both made 2-of-3 from behind the arc. Kinsey, scoreless for more than 12 minutes, then finished strong with nine points.  George’s second three gave the Herd the lead for good at 40-37. Marshall hit 8-of-13 shots from three-point range and 17-of-31 overall. Marshall came in averaging nine threes a game. Ten of the 15 treys came from players off the bench.  Early’s final three put the Herd over 100 with 1:22 left.

About Williams, D’Antoni said he means so much more than just providing a presence in the middle.

“I’m proud of Jannson,” D’Antoni said. “He’s a bigger part than what the stats show. Game potential. He guards the rim with efficiency.”

The Blue Raiders made 7-of-9 shots to start to take the early lead before Marshall began to flex its muscle of defense. The Blue Raiders finished with 12 from behind the arc.

“I thought we came out of the locker room really ready to play on both ends,” Blue Raiders coach Nick McDevitt said. “We got off to a hot start on the offensive end for sure, but a lot of that was predicated on our defense. We had nine or 10 stops in a row to start the game.”

Middle Tennessee had 42 points in the second half, its second-best outpoint for 20 minutes this season.

“One of the areas that they’re not as good is in defensive transition, and we didn’t take advantage of that the way we are capable of,” McDevitt said. “The danger of that is they get you into a track meet, which is exactly what they want. Their pace made us start playing at their pace and shooting early, but we weren’t making it and that puts the ball right back in their hands running the other way.”

Middle Tennessee leads the overall series 11-8, but the Herd has now won the last five. The Blue Raiders are without leading scorer Dontrell Shuler (12.5). He hurt his leg last Friday in a home win over Charlotte.

Next weekend, the Herd will travel to Rice for its final road trip for the regular season. The final two weekends see North Texas and Charlotte visit. The Charlotte games (March 5-6) got postponed on Jan. 8-9 due to the Coronavirus/contract tracing and injuries for the Herd.