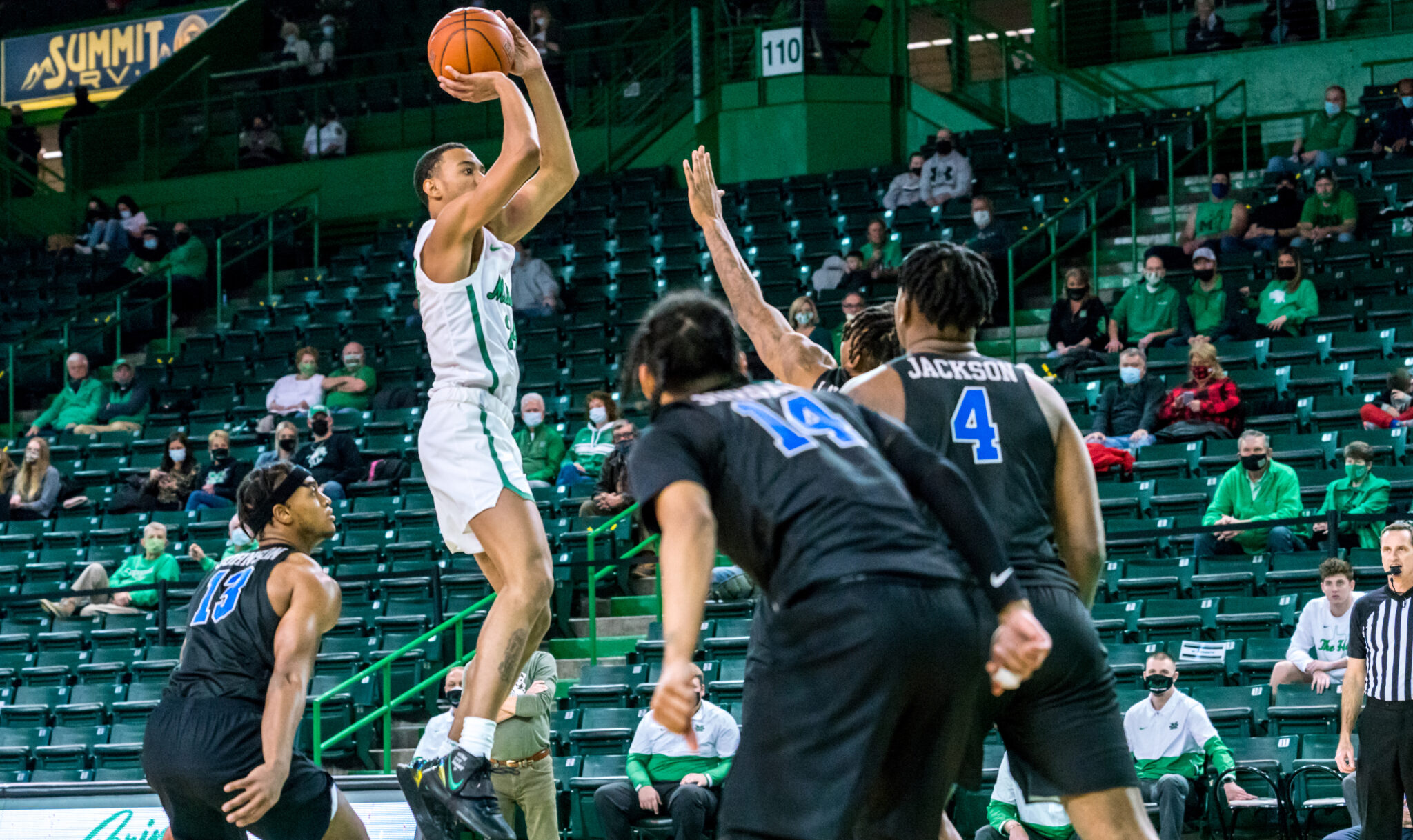 HUNTINGTON, W. Va.  – Give credit where credit is due. Marshall coach Dan D’Antoni tipped his cap to Middle Tennessee State for shooting better than advertised in the two-game Conference USA series at Cam Henderson Center.

In the finale Saturday afternoon, Middle Tennessee again made a quick break and led 19-10. Only this time, the Herd shot better than it did on Friday and behind its three guards who combined for 64 points, Marshall prevailed, 96-85, for the sweep.

“Our defense was there. Give them credit for making shots,”D’Antoni said in post-game radio comments.  “Give us more for making more shots.”

Guards Jarrod West, Taevion Kinsey and Andy Taylor inflicted the most damage, which often is the case. West fired home a career-best 29 points (10-of-16, 5-of-9 on threes), made all four free throws and handed out six assists. Kinsey tallied 25 points (11-of-15 shooting). Taylor netted 10 points and dished out nine assists.

“Our three guards are as good as they are in this country,” D’Antoni said. “I’m excited to watch them and I love coaching them. They want to be at the top of their game every day. When players take control of the team more than the coach, that makes the coach better.”

“I thought our guys did a really nice job keeping pressure on them and forcing them to make plays, but tonight they were able to make the timely play when they needed them,” McDevitt said. “You have to give credit to (Jarrod) West and (Taevion) Kinsey, who I think were huge with the plays they made in the last few minutes to close it out.

“You’re kind of fighting a sixth opponent against Marshall in the system they run where they spread you out and create quick and easy baskets at a high level of efficiency.”

Guard Jalen Jordan led the Blue Raiders with a season-high 25 points (topping his previous best of 22 from the night before). He launched seven threes, made them all and finished 9-of-11.

West, the career-leader in steals for the Herd, added three Saturday to reach 244. Randy Culpepper of UTEP is No. 2 in C-USA with 251.

West and Kinsey took turns saluting what each of them means to the team. They became friends on day 1.

“I don’t know if that’s my most complete game,” West said. “I had three turnovers. I don’t like that. Offensive efficiency for sure, it was my best game of the season. Taevion’s efficiency for a guard is crazy. What I like about Taevion is that he doesn’t force the game. He lets it come to him.”
“Sometimes I get stuck watching him play,”Kinsey said of West. “The way he manipulates the game, he’s a point guard truly.”

The Herd will be home for the final two weekends of the regular season. North Texas visits Feb. 26-27 and Charlotte comes in March 5-6 for the games that got postponed Jan. 8-9 due to COVID-19/contract tracing and injuries for the Herd.