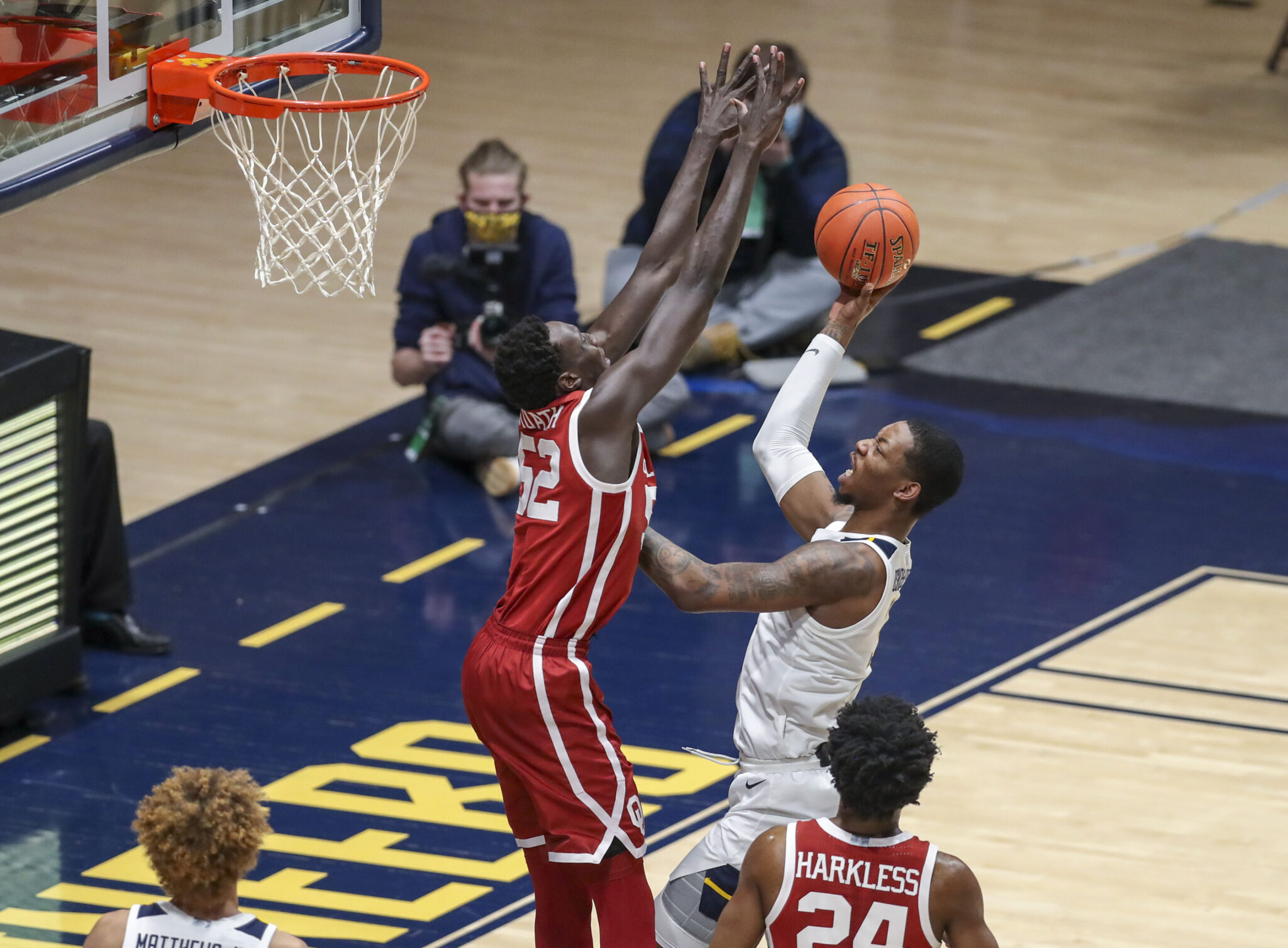 MORGANTOWN, W.Va. — Ninety minutes of basketball at the Coliseum Saturday produced a pair of games decided by a single point and Oklahoma teams surviving a total of four missed shots from the Mountaineers in the final seven seconds that could have flipped the results.

The WVU men’s basketball team saw their three-game win streak stopped in double overtime by the Sooners, 91-90 while the WVU women had an 11-game win streak halted by Oklahoma, 72-71.

6-foot-10 senior forward Kur Kuath scored just one basket on Saturday. But he made an impact defensively in the final seconds of double overtime. With WVU trailing 91-90 with 15 seconds left, Kuath blocked a go-ahead shot attempt from Derek Culver. The ball deflected off Culver, giving OU possession. WVU was able to get another look under the basket in with under three seconds left, but the Mountaineers were unable to convert.

“Kuath is long and he is athletic. It was tough for Derek to find a good spot to score,” WVU junior guard Sean McNeil said.

West Virginia had a pair of chances to close out the game in regulation. Tied at 72, Deuce McBride, who scored a game-winner in a similar situation last month against Texas Tech, was unable to connect on a 20-footer or from the foul line after grabbing the rebound.

“I thought it was good when it left my hand both times,” McBride said. “That’s how I think as a shooter, no matter how many I miss, I am going to keep the same confidence for every shot. We had our chances in both overtimes to get it done.”

McBride came close to a triple-double with 19 points, 8 assists and 7 rebounds.

Sean McNeil entered a shooting zone in the second half with 11 consecutive points as the Mountaineers climbed back from a nine-point deficit, which was their largest of the game. McNeil connected on three consecutive 3-pointers, the last of which came with the shot clock winding down.

“I just saw the shot clock running down, I think there were four or five seconds left so I knew I had to put it up. It just felt good as soon as it left my hand,” McNeil said.

McNeil scored all 21 of his points in the second half. The junior guard has eclipsed the 20-point mark in three of the last five games.

Four days removed from their 82-71 win at No. 7 Texas Tech on Tuesday night, head coach Bob Huggins believed his team did not properly reset after a quality victory.

“We had a terrible practice (Thursday). Yesterday, they were so-so at best. I think it is a combination of a lot of things,” Huggins said.

In the nightcap of the day-night doubleheader, the WVU women’s team surrendered a 12-point lead with 10:29 to play. OU went on an 18-0 run between the third and fourth quarters and they held the Mountaineers scoreless for the first eight minutes of the final frame. WVU committed a season-high 20 turnovers and missed their first nine shots in the fourth quarter.

“I would hope they would be focused. I have been warning them in practices and after the last game that we are not doing what we did, the little things, to win games. It caught up to us today. We’ve got veterans. I’m sure it will take a day for us to get this game behind us. We have a lot of season left. So we have to come out and start a new streak,” Carey said.

“We just have to look at some film, lock in and get ready for Baylor,” said WVU senior guard Kysre Gondrezick. “It is a long season. We have done well so far. We just have to capitalize off the mistakes that we made.”