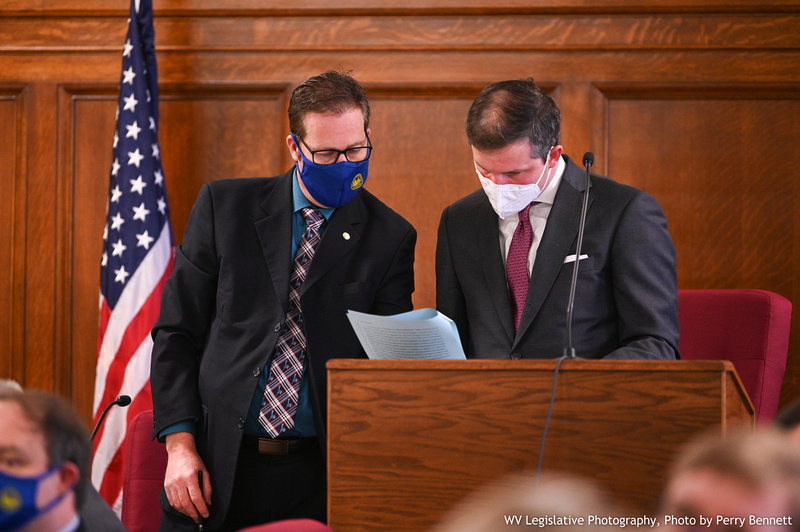 The House Judiciary Committee pulled back a bill placing time constraints on the governor’s emergency powers and then voted to remove a newly-inserted provision meant to clarify the bill applies to the current covid-19 emergency.

That led to some sharp comments about the change.

“It made somebody upset in the executive office, the old king himself,” said Delegate Shawn Fluharty, D-Ohio. “We’re reneging on promises we made to our constituents.”

The committee first passed the bill on Saturday with an amendment specifying that it applies to the current emergency.

The amendment approved that day by the majority of the committee said, “Upon passage any state of emergency or state of preparedness currently in effect is subject to the provisions of this section.”

The amendment had been proposed by Delegate Pat McGeehan, R-Hancock, who objected to its removal today. He had spent much of the spring and summer trying to drum up support for lawmakers to call themselves into special session to oversee the governor’s use of emergency powers.

“I’m not going to try to convince anybody this language should stay in the bill. It seems like everybody has their mind made up,” McGeehan said today.

This drama sprawled out over several days.

McGeehan proposed the amendment when the committee started considering the bill on Friday. As discussion of it just got started, Judiciary Chairman Moore Capito announced that time was running out on the availability of the committee room. Another committee was expecting the room soon, and time was required to clean it because of pandemic precautions.

When the committee resumed its consideration on Saturday morning, Capito made an argument against the amendment.

“While I don’t think it’s a poison pill by any manner, I think it’s unnecessary to the bill,” said Capito, R-Kanawha.

“I fear this could cause confusion with timelines and deadlines. We’re in the middle of an unforeseen and very, very novel and dangerous pandemic right now. I think it’s important that we move forward with the bill the way it’s drafted.”

But that day, other members of the committee spoke up to say the amendment would clarify the bill’s application to the current emergency, and the majority voted to adopt it.

Today, when the committee met again, Vice Chairman Tom Fast moved to reconsider the bill. He was able to do so because it had not yet been officially reported to the House floor.

Finally, committee members voted again on whether to pass the amendment — with the majority this time rejecting it.

Fast’s only explanation was that he believed the amendment was unnecessary.

The ranking Democrat on the committee, Chad Lovejoy, was among those arguing against removing the amendment.

“In a bipartisan manner, we passed that amendment and we were taking it to the floor together. It’s now being stripped away,” said Lovejoy, D-Cabell.

“That is what it is, and I can’t argue with numbers. But I can tell you this: If you’re ever asked, ‘Did you have a chance to step up for the legislative branch and take some role in what is happening to the citizens?’ the answer if you don’t agree to this amendment is ‘I had the chance and I said no.'”

For almost a year, Gov. Jim Justice has been making decisions about the coronavirus pandemic with orders based on his own State of Emergency declaration  last March 16 and a section of state code describing the governor’s emergency powers.

When asked prior to the start of the legislative session about whether the executive’s emergency powers should be subject to more limitations, Governor Justice said there is no basis.

“I’ve surely been working all the time with the Legislature, and you’ve got complete transparency — total transparency on my side. I’m going to do the same thing for another four years,” Justice said last Monday.