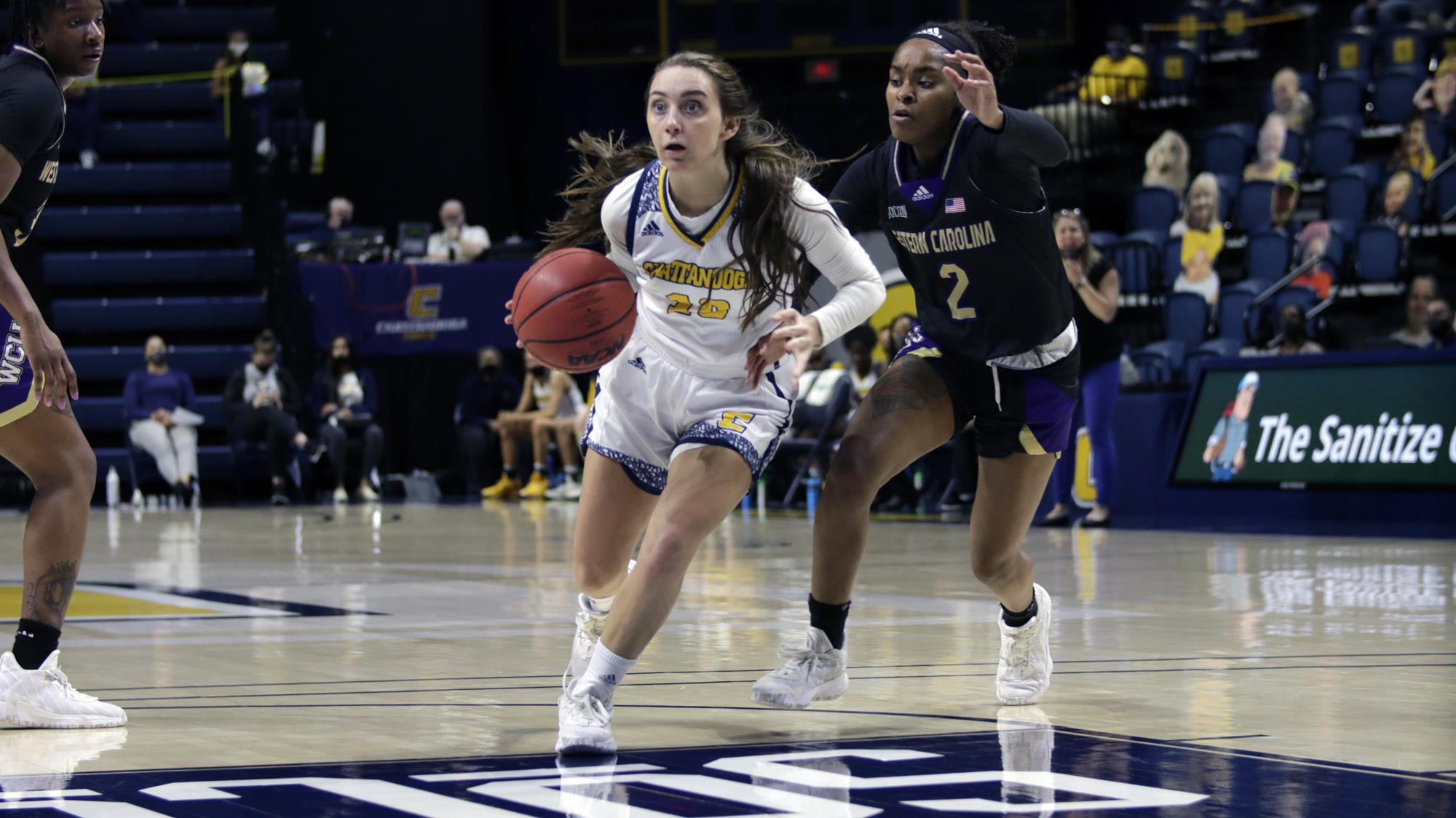 If nothing else, 48 games into her career at the University of Tennessee at Chattanooga, guard Dena Jarrells has made a strong impression on Mocs’ head coach Katie Burrows.

“I trust her,” Burrows says. “When the ball leaves her hands, I think it’s going in every time.”

It’s hard to fault Burrows for her belief in Jarrells, a 5-foot-7 sophomore who played her first year of prep basketball at Tolsia before going on to star at St. Joseph Central for three seasons.

One year after averaging 3.7 points and seeing action in all 29 of Chattanooga’s contests, Jarrells is playing at another level through 19 games of her sophomore campaign. She is fourth on the Mocs in scoring at 7.1 points, third with 45 assists and has impressive shooting percentages of 48.2 from the field, 42.9 from 3-point range and 84.8 from the free throw line.

“I worked over the summer to shoot more consistently,” Jarrells said. “I tried to understand that every detail counts and there were times in the summer I’d go two weeks without shooting past 15 feet. I would just shoot over and over again for hours in the gym.”

Jarrells has scored in double figures six times this season, including 15 points in a close loss to Vanderbilt back in December. Most recently, she scored 13 points in consecutive victories over Western Carolina, combining to make 6-of-8 field goals, 4-of-5 3-pointers and all 10 of her free throws.

“Somehow she’s able to block everything out and she doesn’t get frazzled,” Burrows said. “If it’s ever a bad shot, it’s usually because she gets too deep and tries to score over a couple defenders which is not her strength.

“She’s doing a better job of knowing when to keep going and when to pull back or kick it and she’s grown there from last year to this year. That’s why you see her percentages getting higher. She’s deadly with her feet set and she has range.”

Although she didn’t shoot as well as she hoped to as a freshman, the playing time Jarrells received has proved invaluable and helped her grow in her second season at the Division I level.

“I never really had to learn a new offense or style of play because I always played for Shannon (Dawson) and Scott Johnson growing up and in high school and AAU, so I knew what they wanted because I grew up around it,” Jarrells said. “Playing for a new coach and understanding what kind of coach she is and what she wants was probably the hardest thing.

“But it was also a challenge playing with new teammates and learning the players. It took about a month even when the season started. I felt kind of off when I was first out on the floor. Once I watched film an hour a day of the other girls and saw what coach Katie likes herself, that helped me a lot and it slowly started progressing.”

For a player who four times was named first-team all-state in high school and part of two Class A state champion teams at St. Joseph, being on an 11-18 team last season was a challenge.

“I’ve never been in a situation losing like that and being on the other side of it,” Jarrells said.

As she focused on improving her game ahead of her sophomore season, Jarrells also tried to develop into more of a leader and challenged the Mocs to improve as a whole.

“One of the things I emphasized this year was it’s OK to be friends, but we have to make each other better every day in practice,” Jarrells said.

The Mocs are currently 12-8 and have won four of five as they seek a strong closure to the regular season before the start of the Southern Conference Tournament.

The play of Jarrells will likely go a long way toward determining how the season ends for Burrows’ team.

“She wants to be a coach so a lot of it isn’t physical talent, but her mental capability and how she can be better getting her teammates where they need to be and making calls that are going to be most effective,” Burrows said. “I don’t like to make every call on the sideline. I let my players play. We want her to think a little bit quicker on her toes. That’s where we’re trying to get her to develop when we watch film.

“Her ball-handling has improved tremendously from last year to this year. For Dena, it’s just continuing to fine-tune things and it’s more of the mental side and being a coach on the floor that can really help her.”