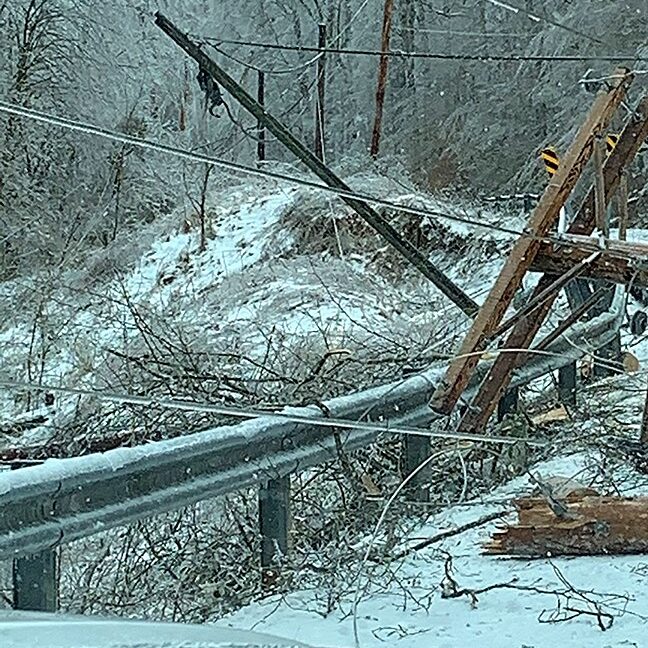 Scenes like this are why the restoration of service for thousands of Appalachian Power customers is slow going.

CHARLESTON, W.Va. — Despite getting about 30,000 outages restored in the past 24 hours, the task ahead of Appalachian Power Wednesday remained daunting.

As of Wednesday evening, more than 61,000 customers are without service. The utility stated in a night report favorable weather allowed for helicopter and drone assessment revealing extensive damage to transmission and distribution infrastructure.

“It’s a massive effort, but we still have eight sub-stations out and about 30 distribution circuits, so there’s some big numbers still out there and a lot of work ahead of us,” said Appalachian Power spokesman Phil Moye.

Even as crews worked on restoring those outages, they continued to deal with ice coated trees and the added misery of a deep, arctic freeze which dropped temperatures into the teens. There is also the added concern of a forecast for the next 24 hours in many of those same areas which threatened even greater setbacks in the restoration effort.

“What we’re looking at in the areas where the ice storm hit is some heavy, wet snow. As long as that ice is on the trees and limbs, the snow is going to accumulate and stick to the ice and cause additional weight on those trees.. That’s the concern.” Moye added.

Moye said Wednesday teams were in the field providing assessments to what materials and equipment would be needed for each individual outage. Line repair crews from across the country have been in West Virginia helping with the outages. Moye admitted it was a slow process, but also said the organized effort will allow them to restore large chunks of outages simultaneously.

Those large outage numbers will get the top priority since they can restore the most service with the same amount of resources.

Appalachian Power has contracted tree crews to clear the roadways to get to some of those outages. However, a lot of that work may fall to members of the West Virginia National Guard as they begin to deploy into the four counties where Governor Jim Justice declared a State of Emergency. The declaration covered Putnam, Lincoln, Cabell, and Wayne Counties. National Guard Major Holli Nelson said they’d also gotten a request from Mason County for assistance.

“We have liaison teams in those counties helping emergency managers determine what each county needs and to assist them with those needs,” Major Nelson explained.

“There’s a lot of downed trees and roads that need clearing. So obviously we’re going to be working with the Department of Highways folks and Emergency managers to fulfill those requests. It might be cutting down trees or removing debris and that kind of thing,” she said.

With the pending winter storm calling for up to six inches of snow, there may be additional missions where he Guard will play a critical role in those counties.


Lincoln County Emergency Services Director Allen Holder noted a lot of the residents of his county were already stepping up and pitching in on their own.

“A lot of guys here have a chainsaw in their outbuilding just like a lawn mower. You see a lot of private citizens out cutting trees and opening up the road,” he said.

Holder said although they’ve established warming centers across the county, very few are using them.