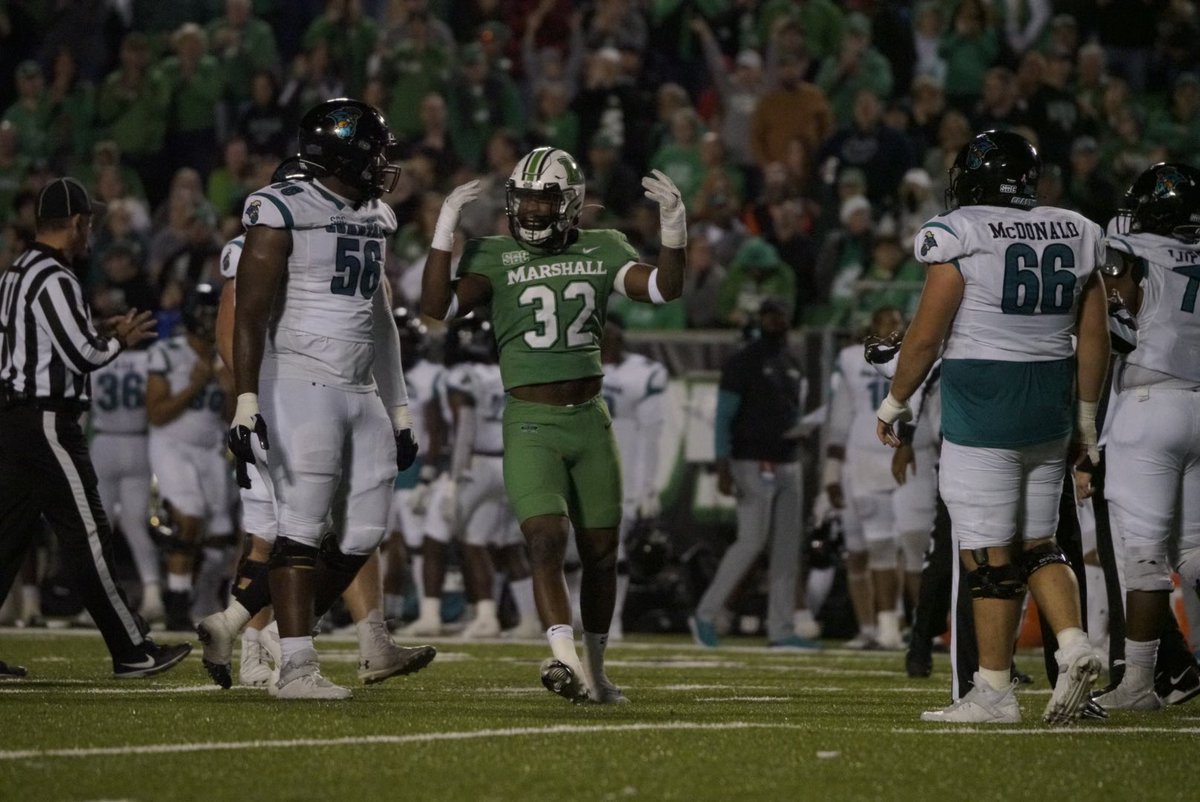 Marshall couldn't overcome a 21-0 deficit in a loss to Coastal Carolina. Photo courtesy of @HerdFB

HUNTINGTON, W.Va. — Marshall’s defense held Coastal Carolina in check for three quarters, but the damage the Chanticleers did in the first period to build a 21-0 lead proved more than enough and they had to hang on for the win, 24-13, Saturday night at Joan C. Edwards Stadium.

The setback spoiled the homecoming festivities for the Thundering Herd as a season-high total of 24,954 fans left disappointed. The Herd is 0-3 in games televised on NFL Network.

“On offense they did some really good things,” Herd coach Charles Huff said. “Marshall beat Marshall too many times today. The defense settled down after the first quarter. Way too many mistakes to beat a good team like that. We did so many things that did not help Marshall.”

Coastal Carolina, coming off a home loss to Old Dominion two weeks ago, leads the Sun Belt East at 4-1 and is 7-1 overall. Marshall falls to 4-4, 1-3 in the league.

Coastal Carolina has a short week now as Appalachian State visits Thursday at 7:30 p.m. Marshall travels to Old Dominion next Saturday. Kickoff is 2 p.m. The Chanticleers have won five straight road games and are 10-1 in Sun Belt road games since the start of 2020.

Coastal Carolina racked up 190 total yards on its first three scoring drives. The Herd were in control from that point as the visitors had 271 total yards compared to 407 for Marshall. The Chanticleers went 3-for-3 scoring in the red zone to the Herd’s 2-of-5.

“The defense started slow and it caught up to us,” Huff said. “It changes the way we have to play. Start the second quarter down 21-0 makes it tough. The defense started looking at the right stuff, doing what they should’ve been doing.”

Coastal Carolina coach Jamey Chadwell said his team got back to playing its kind of ball regardless of opponent.

“We talked all week about just igniting ourselves and playing with passion and purpose,” Chadwell said on the WRNN FM 99.5 post-game show. “I didn’t care who we played. I just wanted us to play our type of game. If we’re just playing that way, I’ll live with that, I’ll live with whatever happens. I knew we’d come out and play better.”

Coastal Carolina managed fewer than 100 total yards over the final three quarters. However, its defense rose to the occasion when the Herd reached the red zone.

Coastal Carolina quarterback Grayson McCall completed just 13-of-24 attempts for 121 yards and TD. That one made him the school’s career leader in TD passes with 73.

“A good quarterback who makes good decisions,” Huff said. “We didn’t knock the ball out and create some opportunities. Discipline, composure, take care of the ball, execute. We didn’t do that.”

Cam Fancher made his second start for the Herd and had his best night numbers wise. He went 19-of-36 for 320 yards. He found wide out Corey Gammage eight times for 187 yards, a career best for Gammage. Running back Khalan Laborn got his 13th rushing score of the season, but his streak of 100-yard games ends at seven. He totaled 16 attempts for 59 yards.

“Cam did some good things,” Huff said of the southpaw. “Cam and Corey did what we were able to do. Get to the edge and get 1-on-1 coverage.

“We moved the ball a lot. We did better things offensively. Hit some X plays. Not a good job in the red zone.”

Fancher said he’s getting more comfortable since taking over for Henry Colombi.

“They prepare me well,” he said. “Take what they give us. Give Corey a chance to get the ball. That’s what he does well. We moved the ball, but we’ve got to finish drives.”

Defensive back E.J. Jackson said the Herd showed its strength, but it was too late.

“We’ve got to do the little things right,” he said. “Our eyes were in the wrong place. We adjusted well.”

Marshall scored 10 points in the second period to trail 21-10 at intermission. Rece Verhoff connected on a 39-yard field goal in the third with that drive helped by a roughing-the-punter penalty on Coastal Carolina.

On its next drive the Herd reached the Coastal Carolina 50 when Laborn fumbled after a hit by Jacob Proce and Shane Bruce recovered at midfield and returned it to the Marshall 36 before Fancher knocked him out of bounds.

Marshall then got the ball at its 39 and Fancher found Gammage for gains of 22 and 13 yards. On fourth-and-three at the 19, the Herd went for it and Fancher’s pass to Laborn in the end zone was broken up by Adrian Hope and Fancher got heat from Shane Bruce.

Marshall won the toss, deferred to the second half and Coastal Carolina went 76 yards in 11 plays on its first possession. The visitors converted a fourth-and-1 at the Marshall 24 and McCall later scored on a 2-yard run.

Coastal Carolina got the ball at the Marshall 49 on its second drive and marched to a TD. McCall completed a 20-yard pass to Jared Brown for a first down at the Herd 8. Backup quarterback Bryce Carpenter had a 3-yard TD run for a 14-0 lead.

Marshall’s offense still couldn’t generate much and the Chanticleers took over at its 35 after a punt. On the fourth play, McCall found tight end Jacob Jenkins wide open for a 37-yard scoring pass for a 21-0 lead. At this point, the 21-point deficit represented the biggest for Marshall this season.

Laborn had the 2-yard TD run in the second period that held up after a review. The key play was a 61-yard pass from Fancher to Corey Gammage, who fumbled when hit and Talik Keaton got it and ran down to the two.

On its next possession, Marshall moved 45 yards to the 23 of the Chanticleers and Verhoff booted a 40-yard field goal. On the flip side, he had one field goal blocked and the offense fumbled twice in the red zone.