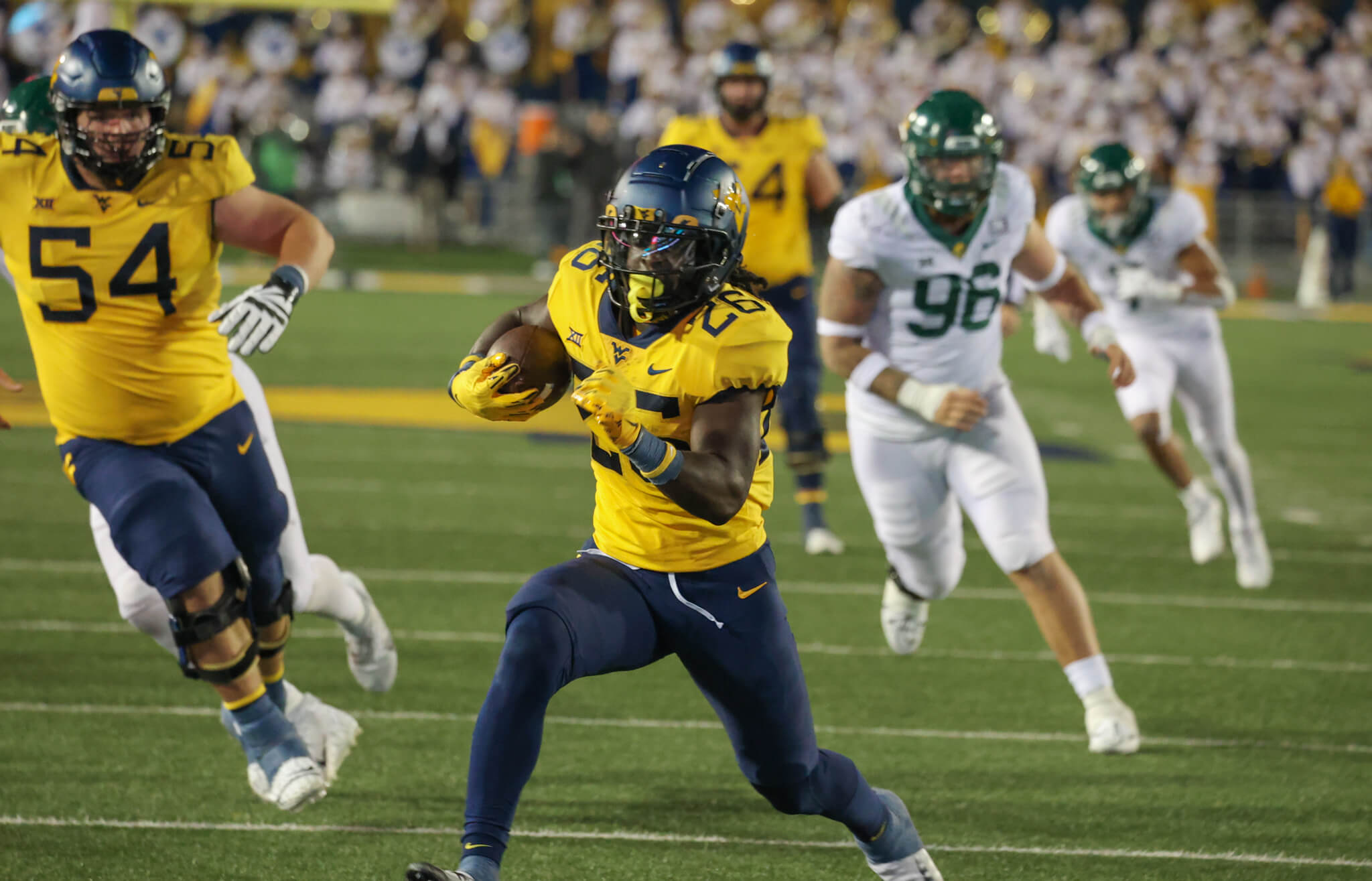 Justin Johnson scores a touchdown on a 19-yard run. Photo by Teran Malone

West Virginia’s depleted backfield will be without leading rusher CJ Donaldson, who underwent surgery Monday for a lower leg injury suffered in last Saturday’s loss to TCU. The Mountaineers may also be down Tony Mathis, who trails Donaldson for the the team rushing lead by 34 yards. Mathis was coming off the best performance of his college career in a victory against Baylor when he suffered an injury October 22 in a loss at Texas Tech.

That prevented Mathis from playing last week, and should he miss his second straight contest against the Cyclones, true sophomore Justin Johnson, himself hobbled, likely becomes the team’s No. 1 option in the backfield.

Johnson was also shaken up against the Red Raiders, though he carried 10 times for 36 yards and caught a touchdown last week against the Horned Frogs.

If the the Mountaineers are minus Mathis, redshirt freshman Jaylen Anderson becomes the No. 2 running back, with walk-on and former Tyler Consolidated High School standout Markquan Rucker in line to be the third tailback.

Earlier this week, Brown confirmed Rucker would be part of the 70-man travel roster to Ames.

“We’re going to see how Tony does. I give you all the same answer, which I know is not necessarily what you want to hear, but the reality of it is anytime there’s injury, while you hate it for that individual and you have limited depth, it creates opportunities,” head coach Neal Brown said. “Justin Johnson, if fully healthy, he has an opportunity to start and then Jaylen Anderson has to be ready to go. Rucker has to be on deck.

“And then we have to be creative as coaches, too, to create some carries. That’s what we’ll do. It rolls on. Trust me, I wish we had CJ, Tony and all of them. We’ve ran the ball well, but we’ve also ran the ball pretty good regardless of who’s been back there. If it’s Jaylen, JJ, Rucker, whoever it is, the expectation is we have to block and they have to make the right read and break some tackles.”

Making matters more difficult is the level at which Iowa State’s defense is playing. Although the Cyclones (3-5, 0-5) enter on a five-game losing streak and winless in Big 12 play, it has hardly been the fault of a defense that leads the conference in scoring (16.6 points per game) and total yards, allowing 295 on average.

Iowa State trails only Baylor in rush defense, with the Cyclones allowing 114.9 yards on the ground, an average of 1.6 more than the Bears.

“They’re playing extremely well versus the run and the pass,” Brown said. “A lot of new faces, but the same product, and maybe even an improved product. It always starts with their defensive line. They don’t get talked about maybe as much as they should. They rotate up to seven or eight. They’re big, long and do a really good job in the pass and run game.”

West Virginia will be without left guard James Gmiter, though right guard Doug Nester is expected to return after being sidelined last Saturday.

When the Mountaineers have been at their best offensively, largely it’s been due to an effective run game that ranks near average among Big 12 rushing attacks with 4.7 yards per attempt and 172 yards per game.

If West Virginia is to near that total, it will have to surpass what the Cyclones allow on the ground by some 50-plus yards. It would also make things easier on quarterback JT Daniels, who’s played at a solid level for much of the season but has passed for multiple touchdowns in one of his last six starts and thrown six of his seven interceptions over five league games.

“Our running back room has had a rough go of it. What’s been cool has been every time we get banged up, someone else comes in and does some decent things for us,” offensive coordinator Graham Harrell said. “We have to keep trying to find ways to get those guys in space and figure out who we can hand the football to that can go be good with the ball.

“Kind of like I’ve talked about since I’ve been here, we have to try to get the ball to our best ball-carriers in space. It doesn’t matter if it’s handing the ball to them or throwing to them. With the running back room being as beat up as it is, we’ll have to do a good job of that this week to give ourselves a chance.”

Quarterback Garrett Greene will likely continue to play a role at receiver after catching two passes for 13 yards against TCU, including a 9-yard reception on third-and-3.

Having also hauled in a 7-yard pass against Baylor, Greene has three receptions for 20 yards, though Brown wanted it to be known a full-time position change is not in order for the sophomore from Tallahassee, Fla.

“He deserves to play and he made two key catches the other day,” Brown said. “He’s still a quarterback and I want to be clear about that. But he’s one of our best skill players, so we have to continue to find ways. I’m in favor of playing him more, too. We’ll continue to figure out some ways with him. He is versatile and he’s a good athlete. He’s one of these guys, it doesn’t matter what you’re playing, he has a pretty good skill set.”