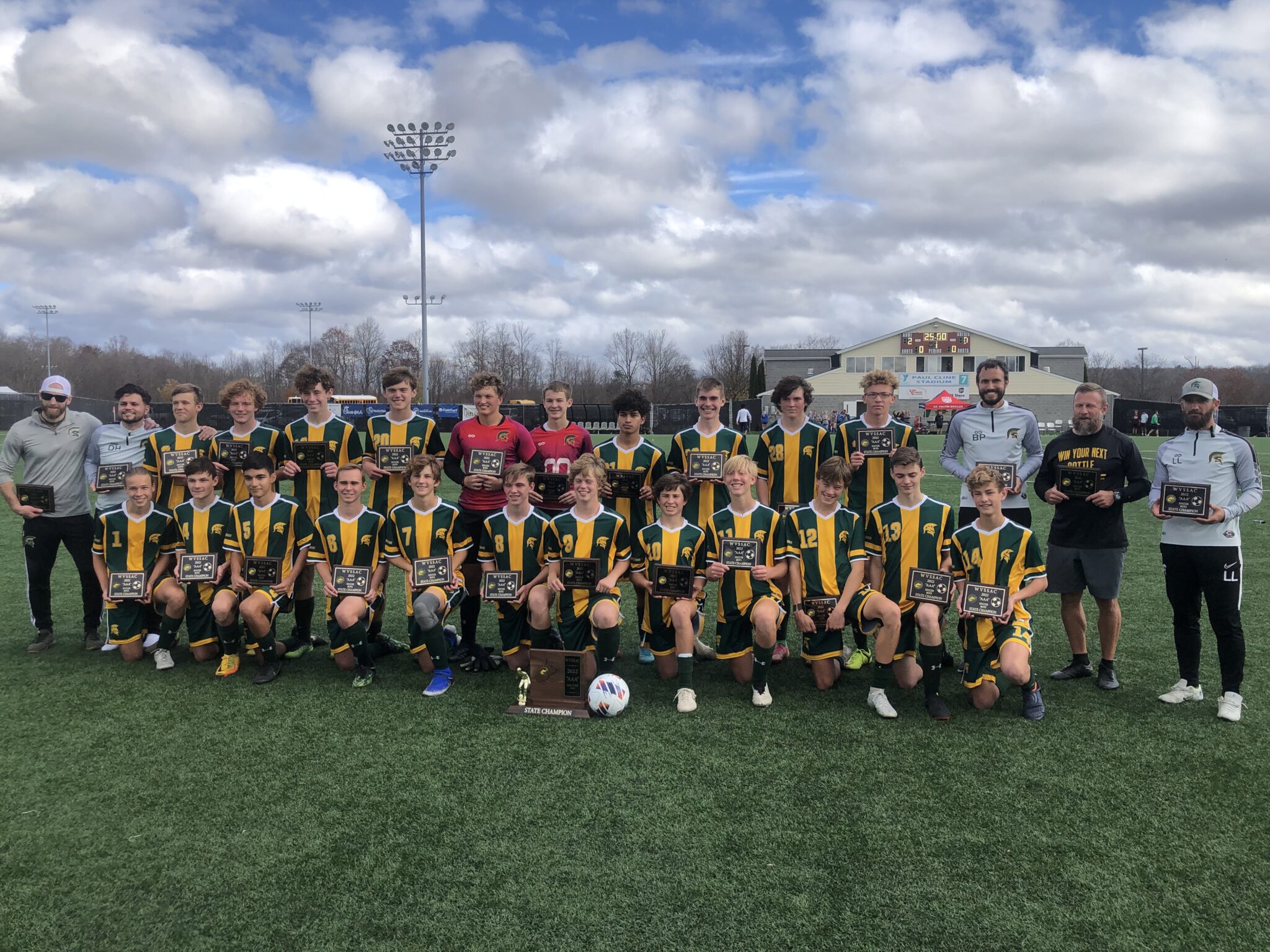 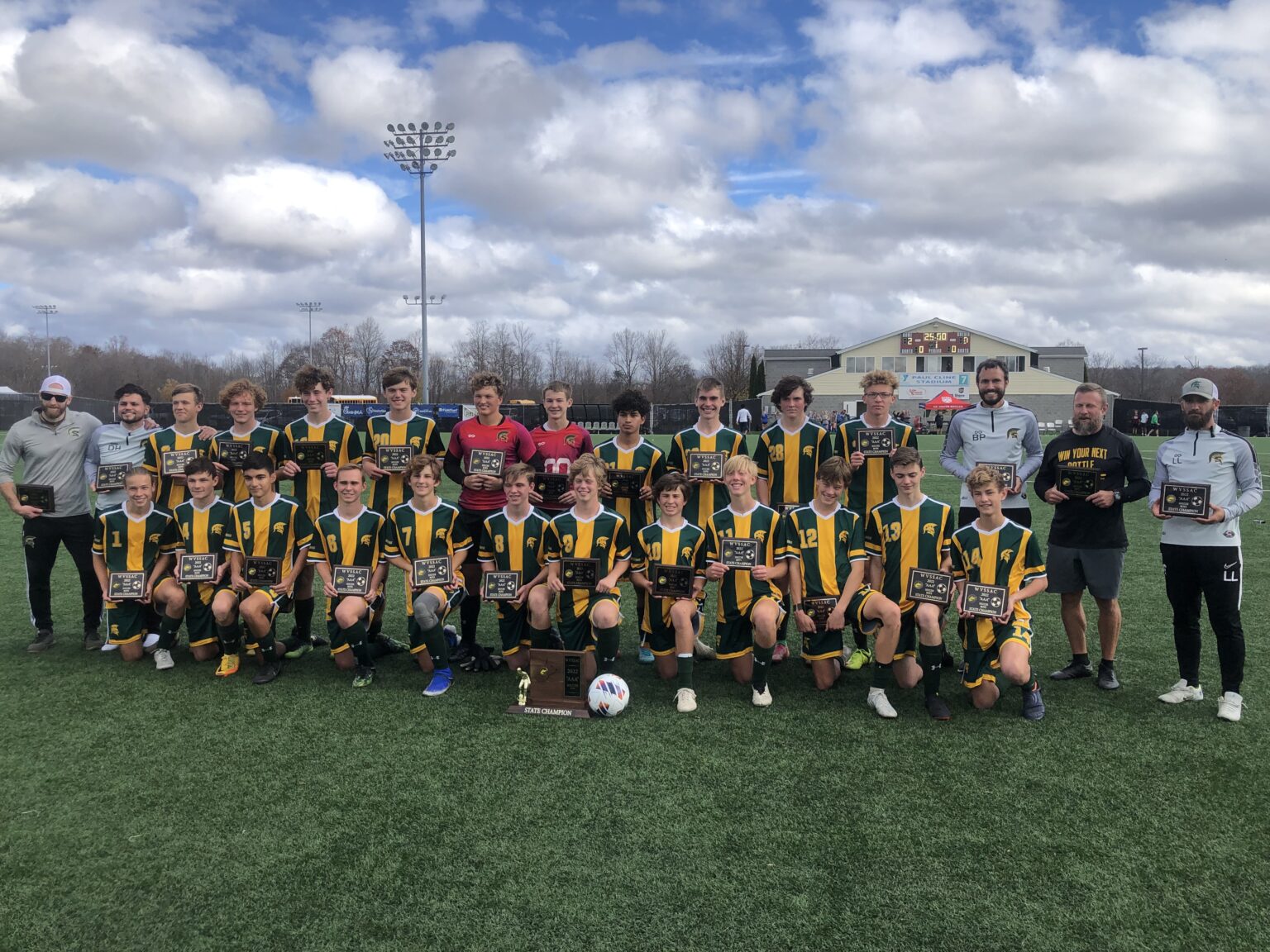 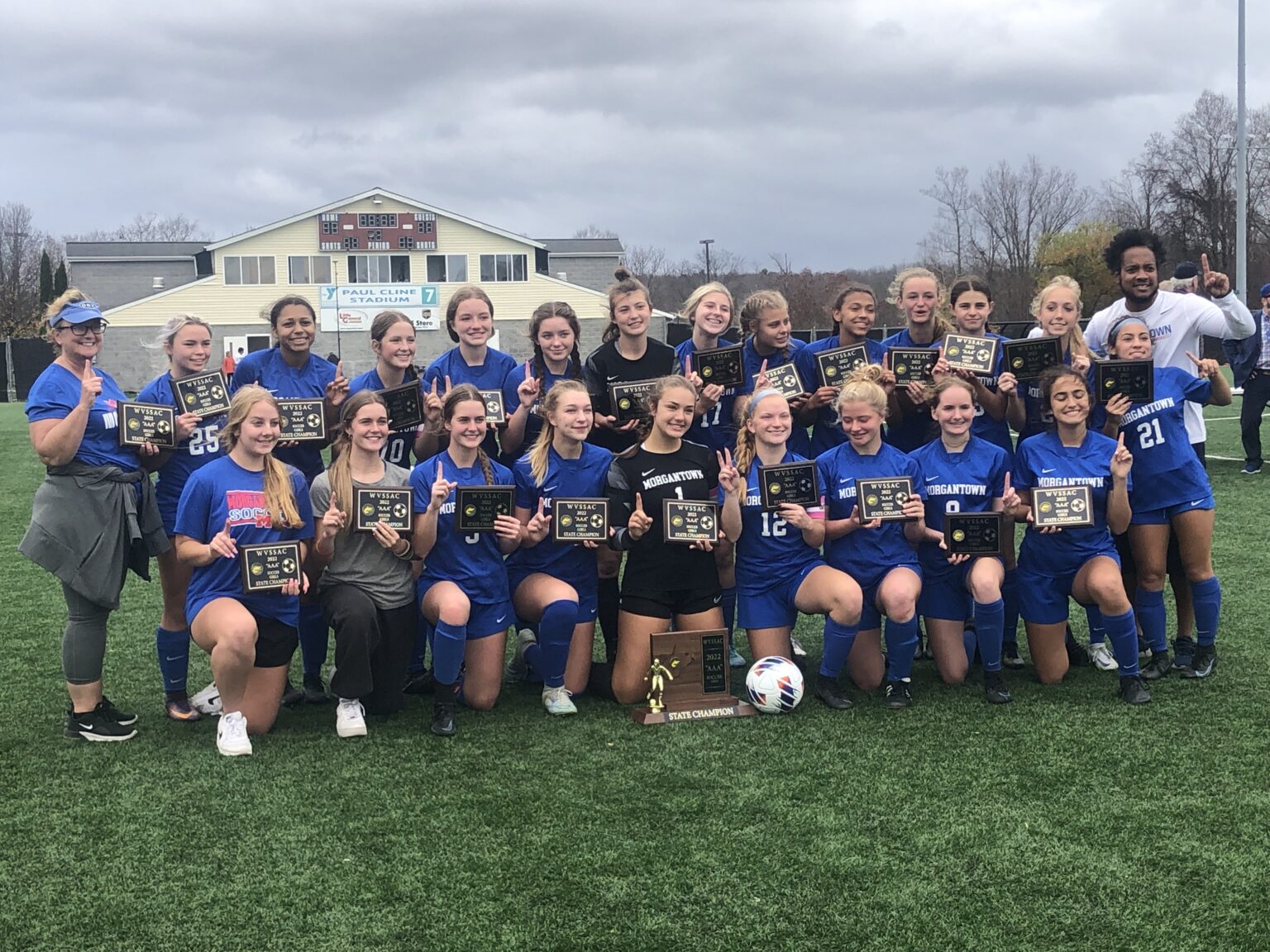 BECKLEY, W.Va. — Greenbrier East’s boys soccer team made the most of its first appearance in the state tournament by securing a Class AAA state championship with a 2-0 victory against Spring Mills in the first of two Saturday matches played on Cline Field at the YMCA Paul Cline Memorial Youth Sports Complex.

In the latter match, the Morgantown girls notched a second Class AAA championship in four seasons with a 2-1 overtime win against Parkersburg South. The Mohigans and Patriots went to overtime knotted at 1, before Gracie Brown converted a penalty kick less than 4 minutes into the first extra session that sealed the outcome in the Golden Goal format.

GREENBRIER EAST 2, Spring Mills 0: The teams went to halftime scoreless, before the Spartans (20-2-1) got what proved to be the game-winning goal from Adam Seams in the 51st minute.

Seams set up the next goal by delivering a pass to Luke Dolin, who scored to double the Greenbrier East lead in the 66th minute.

“We didn’t really change anything up at halftime,” Spartans’ head coach Lucas Lemine said. “The wind helped us a lot. We couldn’t hit a long ball in the first half, because the wind was against us. We were able to find some pockets of space right in front of their two center-backs and we were able to move the ball around. I have to give credit to Adam and just as much credit to Chase Mizia for being humble enough. He’s been our goal-scorer all season, but for him to leave his spot and where he knows he’s supposed to be to go defend so that Adam can go do what he does, the transitions we were able to create when he moved forward were huge.”

That was more than enough of a cushion for Spartans’ goalkeeper Joe Cochran, who stopped five shots to finish with the clean sheet.

Although the result wasn’t what Spring Mills (17-2) desired, Cardinals’ head coach Amed Suazo felt the outcome could’ve been different had it been his team, instead of the Spartans, that capitalized on their chances.

“We missed so many chances and we paid for it,” Suazo said. “When they had their chances, they scored. That’s what’s beautiful about this game. Sometimes, you cannot just rely on the last minute. When you have the chances, whatever the time is, you have to score.”

It was the first appearance in a state final for both programs.

“No less than what these kids deserve,” Lemine said of the Spartans’ first championship. ”The seniors have been working their tails off for four years. This community is behind us. I can’t tell you how many former players are here that helped build what I started. This isn’t the end, but I told these kids before the game that we want to make sure we played for ourselves today. We’ve always talked about playing for players in the past and future players. I wanted them to focus on themselves, but now that it’s over, this is for everybody.”

MORGANTOWN 2, Parkersburg South 1, OT: In Friday’s semifinal, the Mohigans’ Gracie Brown scored during the second overtime session to send her team to a 1-0 win over Hedgesville.

Less than 24 hours later, history repeated itself, though this time, Brown didn’t need the second OT to provide the winning goal.

After Ashleigh Weaver drew a Patriots’ foul inside the 18-yard box, Brown was given the opportunity to win it for her team on a penalty kick.

The daughter of West Virginia women’s soccer coach Nikki Izzo-Brown did just that when she sent a shot to the right of Patriots’ goalkeeper Emilee Owens, who made a diving attempt, but couldn’t prevent the attempt from slipping just inside the post for the junior’s second game-winning goal in as many nights.

“I told them, ‘There’s one bit of magic that needs to happen,’” MHS head coach Stirlin Rivers said. “So the magic happened with the PK and then Gracie did Gracie.”

Gracie Brown converts a penalty kick in the first overtime to give Morgantown a 2-1 win over Parkersburg South in the Class AAA final. #wvprepsoccer pic.twitter.com/0cLTNAE1bS

Parkersburg South (19-5) faced a 1-0 halftime deficit before drawing even halfway through the second half.

The tying goal wasn’t without controversy and came on a second penalty kick attempt. Mohigans’ keeper Madysen Scheller stopped the original PK, but was ruled to have come off her line, which equaled a yellow card and required her to momentarily exit the match.

Scheller was then spelled by freshman Camdyn Smith, who couldn’t prevent Adrienne Altizer from providing the equalizer for PSHS.

“I really had to try to calm them down,” Rivers said of his approach after the Patriots got even. “They were very emotional. The way that we got scored on, they thought we had a bad call from the referee and I was like, ‘You have to move on.’ Yeah, maybe it’s a bad call, but it was still 1-1 and we weren’t losing.”

The Mohigans (20-1-1) went to halftime with a 1-0 lead thanks to Cloe Ratliff’s left-footed goal in the 31st minute. Ratliff’s score was assisted by Brown.

For Rivers, who also guided the Mohigans to a Class AAA championship in 2019, the result was particularly sweet. It allowed Morgantown’s seniors, which were freshmen on the last title-winning team, to start and end their careers with a championship.

“They have done more than what we expected,” Rivers said. “They came in their first year with a challenge of can I make the starting team and literally at least six of the eight were starting. They have no fear of getting out there and showing their level of skill.”

It was also the send-off Rivers was hoping for in what marked his fifth and final season as Mohigans’ head coach before he and his family move out of town.

“It’s a wonderful way for me to end with Morgantown,” he said. “I know these girls will continue to get better and some will go on to college and play Division I and Division II soccer. I’m just happy I was able to give my input, not only about the game, but about life experiences.”